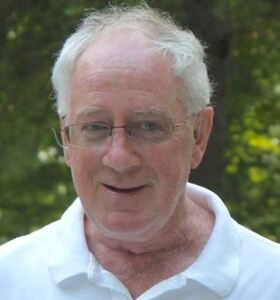 Joseph Albert Doucet, aged 77 of Ridgefield, passed away on January 22, 2021 at home surrounded by his family. Joe, also known as Downhill Joe, Doh, Dads, Uncne Joe, and Grandad (his attempt at getting his grandchildren to call him Grandpapa in a French accent didn’t quite work out), was born in Milton, Massachusetts in 1943. He is survived by his wife of 51 years, Alison Doucet, daughter Katie and son in law Jon Atherton of Guilford CT, son Mike and daughter in law Amy of Ridgefield, and 4 grandchildren, Charlotte and Harris Atherton and Olivia and Lucas Doucet. He is also survived by his sisters, Marianne Singewald (Bob) of Wilton CT and Joni Mullane (David) of Chelmsford, MA and many nephews.

Joe graduated from Georgetown University in 1965 with a degree in Physics. In 1966, he headed to Nigeria to serve in the Peace Corps. After being evacuated at the outbreak of the Biafran War, he moved to Lindi, Tanzania and met the love of his life – Alison - also a volunteer. After leaving East Africa, via Moscow and Amsterdam, he headed to Manchester, England to propose to Alison with the world’s worst hangover. Fortunately for him, she accepted his proposal. They were married on August 8, 1969 in Cheadle Hulme, England and moved briefly to Wilton, CT before buying their home in Ridgefield.

Joe earned his Masters in Education at the University of Michigan in 1969 and began teaching Physics at Brien McMahon High School in Norwalk, CT where his “curriculum” included field trips to the cinema to watch the Monty Python film, Life of Brian. In 1974, he earned a degree in Computer Science from Hatfield University while spending a year in the UK on a Fulbright exchange. In 1977, he started working as a Nuclear Physicist at Schlumberger Doll Research (SDR) labs in Ridgefield where his endless enthusiasm for science and technology served the company until his retirement in 2004. One of his colleagues said, “Joe represented what was once Ridgefield SDR - a small community of scientists, bound together by strong bonds of friendship”.

Joe spent his childhood summers on Cape Cod and continued this tradition throughout his life. He was never happier than when on the water. He sailed for years out of Norwalk Harbor, around Buzzard’s Bay with old school friends, and around the Maine coast. He latterly joined Candlewood Yacht Club and thoroughly enjoyed the camaraderie and sailing.

Joe's interests were many and varied. He could always be relied on if you needed a Santa for a children’s party or a JP for your wedding, to arrange soccer matches, for hashing, for all types of skiing, skating on shallow frozen lakes, going sailing, kayaking, biking, or golfing, splitting wood, making maple syrup, or playing inappropriate Monty Python songs for his kid’s friends. Joe Doucet was a real-life outdoors guy.

He was a goofy, generous, inventive, unassuming and clever man who loved to spend time with his friends and family. He never judged people, seldom got angry and he always laughed at his own jokes, because “they were the best”. In all these attributes he was the best example to those around him - neighbors, friends and family alike.

Joe was the instigator of all the fun and he knew that he squeezed everything he could out of his time. With Joe there was always something good to find just around the next corner, and many were lucky to be brought along for the ride. The family are planning a party this summer when they hope to gather safely with friends to celebrate this good man who lived the best life.

For the last month, the Ridgefield Visiting Nurse Association (RVNA) cared for Joe. All the nurses and carers tended to him in the kindliest way and his family are extremely grateful for their support. In lieu of flowers, donations to this wonderful local non-profit organization are welcome as an expression of sympathy and remembrance of Joe. The website is http://rvnahealth.org and people may dedicate their donations to him.