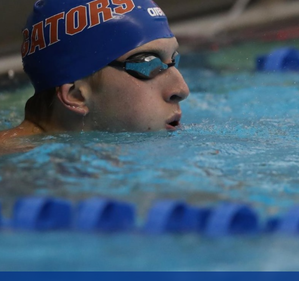 Smith has been compared to 12-time Olympic medalist, Ryan Lochte! Just this weekend, at the Mizzou Aquatics Center, the Gators took home their ninth straight SEC title, led by our very own. He was also named SEC Championship Swimmer of the Meet.

During his high school career, Smith was the No. 13-ranked recruit overall and No. 1 from Connecticut in the 2018 recruiting class according to collegeswimming.com. His High School accomplishments were also extensive, including USA Swimming Scholastic All-American, Two-time NISCA All-America, US National Junior Team member in 2017, Connecticut HS Coaches Association Swimmer of the Year in 2016 & 2017, and Connecticut Swimmer of the Year in 2017.

Can you hear the cheers from Ridgefield, Kieran Smith? We’re rooting for you to bring home gold!

His full records and times are on the Florida Gators website.