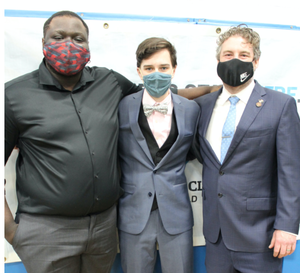 Although a different format than usual, the Boys & Girls Club of Ridgefield (BGCR) held its Annual Youth Leadership Celebration on Thursday evening March 25th. The hybrid ceremony recognized top Club members for their significant achievements, efforts and dedication in various areas here at the Club, as well as honored the Club’s Character and Leadership Program members in Gem Club (for 5th grade members), Torch Club (for middle school members), and Keystone Club (for high school members), and highlighted Youth of the Year honorees.

The award winners, the Youth of the Year candidates and the BGCR Staff Members gathered at the Club for the ceremony, which was live-streamed for families, friends and Club supporters to view at home. The evening started off with the announcement of the 2021 Keystone Awards, awards given to younger Club members recognized for their outstanding contributions to the Club over the past year. This year’s winners included: Bobby Marshall and Aiden White (Games Room Champions), Ryan Shortal (Big Paw Award), Taylor Ogden (Artist of the Year), McKenzie Owen (Education), Timmy and Reilly Jackson (Rookies of the Year), Tommy Ogden (Sportsmanship), Justin Kim and Sydney Rossi (Character), Allie Childs and Jackson Dell (Gem Clubbers of the Year), Alex Salley (Torch Club Member of the Year), Vanessa Diana (Outstanding Leadership), and Katherine Ward (Outstanding Service).

“Although we wish that we could have gathered the entire BGCR community, we were thrilled to be able to have the Club members receive their recognition in-person. It was amazing to see the smiles on their faces when they arrived, as they all have waited a long time for this moment,” explained Mike Flynn, Chief Executive Officer at the Club. “We were also excited to be able to bring the Boys & Girls Club into people’s homes for the night!”

For the first time in BGCR history, the Club named a 2021 Junior Youth of the Year, Sydney Rossi. “Since 2008, our Youth of the Year program has grown to include more learning experiences and opportunities. As our teen population continues to grow, we are finding that the program is growing to have more and more candidates each year! We once had two or three candidates yearly, but now, we have 15 to 20, and have expanded our judging process from one night to two,” explained Kristin Goncalves, Associate Executive Director at the Club. “With two interview nights, we thought it would be only fitting to name an additional winner. From this year, moving forward, our Freshman and Sophomore Club members will compete for the title of Junior Youth of the Year.”

“In the last couple of years, Sydney has really developed into a leader and someone who really cares about the Club and the Club community. She is really coming into her own and is passionate about everything she does at the Club. We can’t wait to see what she’s going to do in the next two years as she finishes out her BGCR membership.” said Mike Flynn.

The evening concluded with the announcement of Eli Keeler being named Boys & Girls Club of Ridgefield’s 2021 Youth of the Year. The Youth of the Year title is a prestigious honor bestowed upon an exemplary young person in recognition of leadership, service, academic excellence and dedication to a healthy lifestyle. Now in its 74th year, the Youth of the Year program honors our nation’s most awe-inspiring young people on their path to great futures.

As the Club’s Youth of the Year, Eli, a Ridgefield High School Senior and lifetime Club member, will receive the Couri Scholarship Fund’s $5,000 Youth of the Year scholarship. “Eli is an exemplary member of the Boys & Girls Club of Ridgefield, and has been since he first joined. He has participated in all the programs and events that the Club has to offer, and has really developed into a great role model for our younger Club members and a true leader amongst his peers,” said Mike Flynn. “He is a true definition of a Club kid and we are so proud to name him our 2021 Youth of the Year.”

“We beyond proud of all of our Junior Youth of the Year candidates and our Youth of the Year candidates. All 16 of these young people are extraordinary leaders in our Club and our Community, and we are honored to call them Boys & Girls Club kids.” exclaimed Jeff Goncalves, Program and Teen Director at the Club. “There is no doubt that they are on track to become great leaders and we can’t wait to watch!”

Each day at the Club we provide youth development programming in five core areas: Sports, Fitness & Recreation, the Arts, Education & Career Preparation, Health & Life Skills, and Character & Leadership Development. Members of the Club participate in activities in our five core areas that encourage increased learning, improved fitness, positive decision making, creativity, leadership, and community service. As part of the National Boys & Girls Club movement, we are able to utilize high quality programs grounded in years of research. Programming activities are scheduled each day and are free to all Club members.