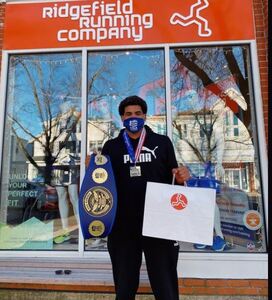 Searfoss said, “Fernely came by a year ago to get fitted for sneakers for his boxing training and stopped by yesterday for a new pair, this time with the USA Heavyweight champion belt!” Shea added, “He'll be rocking his new 860s as he heads to Colombia for more training with his eyes on the Olympics!”

According to Fernely’s Instagram, he’s rocked the Golden Gloves Championship five times, is a Ringside World Champion, and is Fastest Heavyweight in the [Tokyo 2021]. Fernely is active on Twitter so get a ringside seat @Fernely_jr