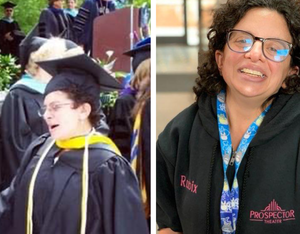 Juliana, Grant Coordinator at The Prospector Theater, is a passionate advocate for individuals with disabilities, particularly those with Noonan syndrome, a disorder caused by changes in one of several autosomal dominant genes. (Read more: National Human Genome Research Institute).

Dr. Robyn Housemann, Department Chair and Professor in the Department of Health Promotion and Exercise Sciences at WCSU, remarked, “The work Juliana does at the Prospector Theater creates an environment of inclusivity for people of all abilities. She has taken the role of a community health educator from one that was focused on raising awareness about Noonan syndrome to one that creatively builds hope, empowerment and learning for all.”

Valerie Jensen, the founder of The Prospector Theater is beyond proud of the accomplishments of longtime Prospect, Juliana. “I knew she was a superstar when she starred in the production of Bride of Frankenstein.” But, getting Juliana to work at the Theater was no easy feat. “ I finally got her to come in [to the Theater] and she took to the Prospector like a fish to water. She is incredibly smart and adds much value to the daily operation of our nonprofit including working with our research and development team,” said Jensen.

Housemann added, “Juliana’s efforts have not gone unnoticed. She has persevered and overcome challenges that would have stifled others. Juliana shares her passion for advocating for those with a disability with enthusiasm and a true interest in helping others.”

Jensen said that during the challenges of COVID, Juliana continued to do her job - and then some. “Working remotely didn’t slow her down. She was able to use technology, navigate Zoom and work tirelessly during the pandemic.”

The Prospector Theater is a nonprofit dedicated to providing meaningful employment to people with disabilities through the operation of a first-run movie theater in Ridgefield, CT. Employees of the Theater are known as Prospects, and we are encouraged to sparkle, shine, and transform our passions into professions.

Photo (courtesy Prospector Theater) shows (left to right) Juliana receiving her diploma at her college graduation from WCSU and smiling in the lobby of the Prospector.