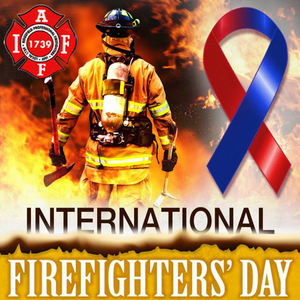 Today, International Firefighters' Day, we salute the men and women of the Ridgefield Fire Department for their courageous efforts in keeping our community and its residents safe and informed.

On May 4 each year, we honor and thank these local heroes and fellow firefighters around the globe for the sacrifices they make on our behalf. We also pay tribute to those firefighters who have gone before us who dedicated their lives to protect us.

On the Ridgefield Professional Firefighters Facebook page, Ridgefield firefighters shared Fire and Ice by the late Paul Harvey who so eloquently gives us an inside look at why firefighters do what they do in the face of danger.

Nobody knows why firefighters are firefighters. Not even they can tell you why. It's time somebody tries.

Firefighting is the most risky of all dead-end jobs and yet also the one where most workers are most likely to punch in early. It's hard enough to believe that; it's impossible to explain it. Fire and ice are uncomfortable separately or together. Wives hate the hours. Kids love the noise. Fire and ice.
Any day at the firehouse the bell from hell puts the dispatcher on the horn with a tenement tinderbox address. Into the bunker pants, turnout coat, grab the mask, and go. Minutes later you're onsite. As others run out, you go in. You'll need all you can carry the four-pound ax, a six-foot hook, the Halligan pry bar. The ceiling concealing the smoldering has to come down and it's one of those stubborn tin ones. In the scary dark with the heat eating your ears, you're gouging out and tearing loose and pulling apart, gulping air and tasting black. Your windpipe is closing and you've lost track of which way is out. Is it really worth it?
They've budget cut your ladder company from six to five, so now everything you do is 16.67 percent more difficult and more dangerous. Your air is low. Inside your mask, you're throwing up. There's a searing ember down your neck. Torn gloves expose a smashed hand. Yet you emerge from the holocaust hugging, with your elbows, somebody's singed kitten. You've had minutes of exhilaration on the bouncing rear mount of a steaming hundred-foot Seagrave, hours of using all you've learned and learning more.
Now you're back at the station house. You've unstuffed your nostrils with soapy fingers; you can almost breathe again. Next, come the tedious hours as you and Brillo gang up on the grimy tools. The cleanup crew at the firehouse is you. When windows need washing and toilets need cleaning and floors need mopping and beds need making, you do it. Fire and Ice, they both go with the job.
Then there's that night another engine company gets there first and you see this wet-eared rookie hot-dogging ahead; his academy boots still shiny. You lose him inside the crackling dark and you forget about him until your helmet warning bell says get out. The battalion chief is calling you off. You get out; the other guy didn't. He had heard a scream from the bottom of burning basement stairs and he headed down there, when on the bubbling tarpaper roof the three-ton compressor broke through, that day we lost two.
Oh, yes, firefighters cry, but only briefly because now comes the inevitable and evermore paperwork just in case OSHA complains or somebody sues. Is it worth it?
Your B crew pumper swapped his day shift so some family guy could be home for his kid's birthday and then, outbound toward a false alarm, your buddy gets blindsided by a hotrod driven by a drunk. Fire and ice.
The intercom barks again. This time it's a warehouse, a big, fast, multiple blaze, probably torched. Onsite, enginemen draped with icicles dragging an inch and three-quarter froze hose are waiting for your big line: ladder men can't make the building without you. Search, rescue, ventilate. Eventually, it's over and out. You're smoke-smudged and sleepless and wrung out, but this one you won. Behind graffiti-fouled walls, you saved what you could. But the raging blaze that wanted to consume adjacent buildings did not because you were there.
Back at the firehouse before cleanup, you and the guys sit a spell, tired but stimulated, drinking coffee and laughing, and feeling good about one another. Nobody outside your world can ever quite know that feeling. In any other uniform, you get streets named after you. In this one, you risk your life to save people. Until one day you run out of chances and at one final fire, either you buy it or you don't. If you don't, it's only eventually to be brushed off with a puny pension. And yet there's no third way that you'd ever leave this job and, you're doubting even God knows why.
You're out of the shower now; most of the grime and some of the cynicism are down the drain when you hear a strangely familiar voice saying, "It is worth it, It is worth it." And there is nobody there but you. The quiet voice from nowhere saying "For salvaging things and people from flames, I have to rely on your hands." You look around, still nobody.
But when you get over your incredulity, you feel better. Suddenly today's crew cook in the kitchen hollers chow. It's time to eat. It smells like roast beef today, and that'll be good. But you'll eat fast, for any next alarm you'll want to be ready.