Arlene Litt is Ridgefield Public Schools Paraeducator of the Year! 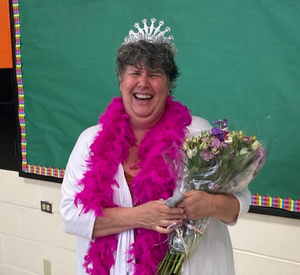 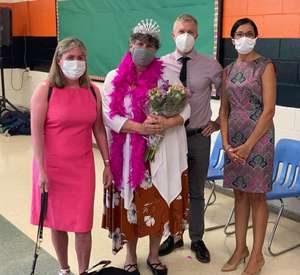 For the second time this spring, Ridgefield Public School administrators, East Ridge Middle School teachers and staff gathered for a surprise announcement of an exemplary ERMS educator. This time, RPS awarded Paraeducator of the Year to ERMS paraeducator Arlene Litt.

Director of Personnel Karen Dewing presented the award to Ms. Litt, remarking that Litt distinguished herself from the twenty-one other exceptional paraeducators nominated by families and RPS staff because her contributions went beyond the classroom to better the entire school community. Those nominating Ms. Litt commented on her relationships with students, her dedication, and her work ethic in this COVID year but also through the years she has worked at RPS.

Of the many glowing commendations Ms. Litt received is this gem: “Arlene Litt is one of the kindest, most accepting, hard-working people with whom I have had the pleasure of working. She lives by the ERMS Core Values of PRIDE. She treats adults and kids as if they are treasured members of her family. She embodies the RPS Vision of the Graduate traits and models them for students every day.”

Another person gushed, “Arlene Litt is a true member of the entire Ridgefield Community. She stays after school on a regular basis to assist not only her students but others involved in extracurricular activities. Arlene has been instrumental in continuing the musical and theater program at East Ridge Middle School. She also has been at the forefront of food drives and distribution for our East Ridge Community.”

Ms. Litt, wrapped in a pink boa and wearing the ERMS crown, thanked her students, her colleagues, ERMS Principal Patricia Raneri, and her family, including her son, Jacob Litt, who was included in the planning of the surprise announcement.

Congratulations to Ms. Litt and thank you to all the Paraeducators who go above and beyond to serve our students and school communities every day.