RHS Boys Varsity Lacrosse: the comeback team had a storybook finish with Conner Curran at the center of it all 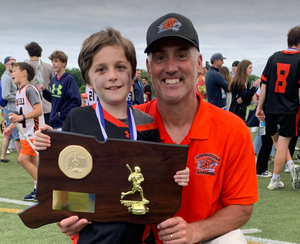 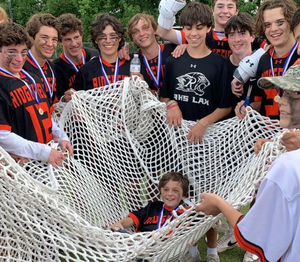 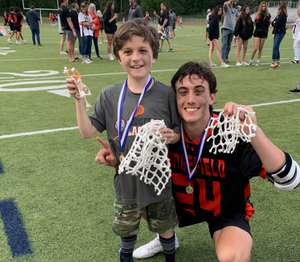 This is a story of a struggling high school lacrosse team facing injuries including defensive starter, Kai Prohaszka’s broken hand, family member’s illnesses, and even the appendectomy surgery of crucial player, Kyle Colsey, the very morning of the state championship. Additionally, this is a story of a determined young boy with Duchenne Muscular Dystrophy, a Coach with a heart and a community that stood behind all of them.

Ridgefield High School Boys Varsity Lacrosse team was ranked 14th 1/3 of the way through the season when Coach Roy Colsey read a social media post about a young boy, Conner Curran, who was suffering from Duchenne Muscular Dystrophy. This terrible disease slowly robs kids of muscle strength and unfortunately leads to death in early adulthood.

The Coach read Jessica Curran’s words about how her son had always dreamed of competing on an athletic field but was unable to participate because of his disease. Jessica described one scene when Conner’s brothers, looking forward to the upcoming season, were excitedly discussing what number might be on their jerseys and Conner chimed in that he would like the number 7 if he could be on a team. Jessica then described how she looked into her husband’s eyes and saw the same pain and that she was feeling – being #7 wasn’t in the cards for Conner.

The words that Jessica wrote moved Coach Colsey and he immediately sprung into action and invited Conner to be an Honorary Captain for the game against Greenwich. He even gave him a varsity lacrosse #7 jersey to wear which made Conner’s eyes go wide with excitement. Conner’s parents could barely hold back their emotions when that jersey fell over his shoulders.

The coach invited Jessica to come and talk to the team about the struggles Conner faces on a day-to-day basis. How Conner, at ten years old, is unable to navigate more than a couple of stairs, unable to run, and is subjected to multiple medical procedures like blood draws, MRI’s, and muscle biopsies.  But, through it, all he approaches each challenge with grit, determination and an infectious smile.

The team politely and quietly listened to Jessica and then were able to see with their own eyes how Conner struggled to navigate through his world. The fluid and natural movements that they had come to experience through life were just not possible for Conner, as he makes every effort just to put one foot in front of the next. The team took notice.

After the Greenwich loss, Coach Colsey invited Conner to become the Honorary Captain for the rest of the season and he enthusiastically agreed. It was a thrill for Conner to be able to experience being an official member of a team and all that comes with it – the camaraderie, the spirited competition and the thrill of a win. Even the bus ride was exciting for Conner - his father Chris shared that - “We drove up to the bus full of very rowdy players getting psyched up to play in the tournament and Conner turned to us and said, “Mom and Dad the bus is for players only – I am going on by myself.” The kid has been through a lot with his disease and a bus ride with a bunch of much older, very loud guys did not intimidate him one bit.”

As the season progressed, the community came together to cheer on the team, read the updates on Conner’s lax varsity experience that Jessica would post and support a young 10-year-old Honorary Captain. Coach Colsey extolled upon the boys that the main goal was to come together as a team and get better each and every day and with hearts like lions they persevered and did just that. They beat back the dejection of their losses, their family struggles and the injuries their teammates faced and slowly the losses faded away and the momentum of wins started to pile up.

They gelled as a team and were executing plays with a quality of speed and precision that gained them win after win. The players started to open up to Chris and Jessica, with a presence and maturity way beyond their years, about how they had come to understand how fortunate they were to be able to walk onto a lacrosse field and compete as they do. They shared that they wanted to win as a tribute to Conner and had written Conner’s initials into their helmets.

This team with a massive heart made it to the state finals. However, the very morning of the finals the team learned that Kyle Colsey, the coach’s son the leading scorer, had to be rushed to the hospital to have appendectomy surgery.

Once again, they had to pull together and re-group to face down a tough opponent. Fairfield Prep took an early lead and it was 5- 2 Fairfield Prep in the early third quarter but with tremendous resolve and determination, they battled back to a 5 to 5 tie with 3 minutes left in the third quarter.

Then, Ridgefield took their first lead 6-5 with 8 minutes left in the game. After that, it was Ridgefield all the way with two more goals for 8 -5 final and the State Championship.

Conner received his medal along with all the other boys on the field that afternoon. There was hardly a dry eye in the house.

This underdog team never gave up and had won the State Championship. And, they gave a young boy a varsity letter, a championship ring and the thrill of a lifetime to be a member of a team that made it all the way.

It was a storybook finish for the team and an incredible experience for Conner.

To learn more about the research being done to find a cure for Duchenne Muscular Dystrophy, visit the Curran’s 501(c)3 charity website at KindnessOverMD.org.

Watch the team joyfully celebrate after their win (and get your tissues).