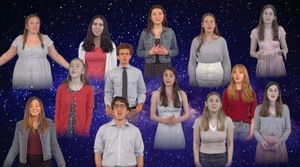 Despite the COVID-19 pandemic shifting their entire season online, the Ridgefield High School 2020-21 streamed theatrical productions of “Nothing Good Happens After Midnight / Monologues Unmasked” and “The Theory of Relativity” received a combined 15 nominations for the 18th annual Halo Awards.

The Halo Awards are presented annually by Seven Angels Theatre of Waterbury and celebrate the best of high school theatre in Connecticut. More than 70 high schools throughout the state participate, with the awards once again being presented in a virtual ceremony over the course of three nights.

The winter production of “Nothing Good Happens After Midnight / Monologues Unmasked” was nominated for Best Contemporary Play, with individual nominations for Audrey Huff (Savannah) for Best Female Standout Performance, Liam Huff (George) for Best Male Standout Performance, and a collective nomination for the entire cast for Best Ensemble in a Play. Behind the scenes, Nate Cohen was nominated for Best Video Production and Emma Joyce received a nomination for her Original Program Cover Design.

Ridgefield High School’s achievements will be recognized in a virtual ceremony to be streamed on July 9. Tickets are free but must be reserved by visiting www.sevenangelstheatre.org.