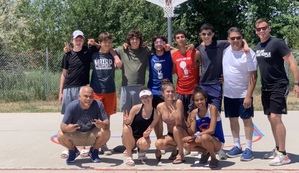 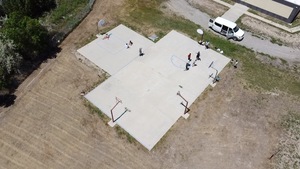 Despite the beating sun and long hours causing us terrible sunburn and exhaustion, we persevered. We kept going because we knew the end result of this mission. It was not to recreate a nice basketball court for kids at this school to play on at its core, it was to help recreate bonds that have progressively been broken over the years between Native Americans and those that don’t share that background.

Sitting in central Wyoming, a four-and-a-half-hour drive northeast of Salt Lake City, Utah, sits an expansive 3 ½ million square mile reservation called the Wind River Indian Reservation. 27,088 people call this place home and I was lucky enough to call it that as well from June 28th to July 3rd, 2021. Twelve people, including me, traveled here as members of a Connecticut-based nonprofit organization dedicated to uniting communities through basketball called Full Court Peace. Every day, the 12 of us left a small town called Lander, Wyoming and ventured onto the reservation in a great white van full of paint cans, brushes, tape, and crack filler to chip away at painting and repairing a basketball court at Wyoming Indian Middle School.

I was also in Cuba in March of 2018 for a Full Court Peace trip. Being in a third world country, I witnessed crippling poverty and the absence of hope and chances for development and improvement. Traveling to Wind River Reservation, which is in one of the most economically developed and prosperous countries in the world, I didn’t expect to find the same hardships. It turns out that I was wrong. Here, 40% of people don’t have running water; WiFi is virtually nonexistent among households; homes are made out of anything that the people can get their hands on; and unemployment is around 80%. Addiction rates near 50%; the crime rate is five to seven times the national average; and 71% of the reservation’s citizens are obese. I witnessed these statistics in action.

Reflecting on my experience on the Wind River Native American Reservation and the status of this country’s original inhabitants today, I still do find some solace and hope. Before getting on the main road to head back to the airport in Salt Lake City after we had finished improving the basketball court, we first stopped at a Native-owned restaurant. The president and founder of Full Court Peace, Mike Evans, was in the restaurant ordering food while we were in the van. Looking around, he saw that multiple Native diners were staring at him in a disgruntled manner. Witnessing this behavior, someone in the restaurant that Mike knew spoke out and said, “He is with us.” Instantly, the faces of annoyance disappeared and grateful smiles arrived.

Uniting this country and stitching divides between people and entire groups is not as difficult as we make it out to be. It takes simple gestures like showing initiative to want to unite communities, to learn from others, and to connect with others to chip away at accomplishing this feat. Divide is everywhere and between almost everything and we can all do our part to make an impact regarding this serious threat.