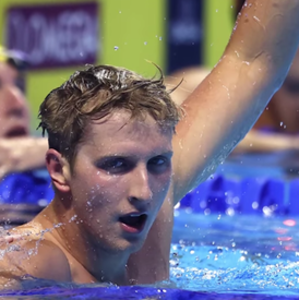 What a night! After finishing third in the qualifying heat at the Tokyo Olympics, Ridgefield resident Kieran Smith finished third in the 400-meter freestyle final on Saturday with a time of  3:43.94 earning a bronze medal!

He will be competing in the quarter-finals for the 200-meter freestyle at 7:30pm on Sunday, July 25th in Japan which is 6:30am EDT in the US on Monday. If Kieran places in the top 16 athletes he will continue to the semi-finals which will take place in two parts and occur at 10:37 and 10:43am on Monday, July 26th.

According to Fox61, Smith is the second Ridgefield High School alum to qualify for the Olympics in swimming. Janel Jorgensen went to the Seoul Olympics in 1988 after winning two gold medals at the PAN American Games.