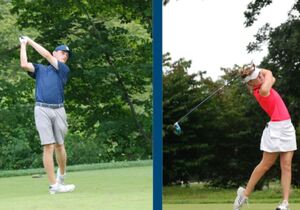 After a long day of golf, the semifinals of the 52nd Borck Junior hosted by Silver Spring Country Club are set. In the Boys Division Alex Elia will square off against Sebastian Beaver while Daniel Casanta will face Charlie Stuhr. The final four in the Girls Division will feature Mia Holbrook against Lydia Welborn and Jordan Levitt facing Ava Gross.

The Boys Division got off to an early start with the Round of 16 teeing off at 7:30 a.m. on a mostly cloudy but warm day. Elia, the co-medalist competing on his home course, played in the first match of the day and got off to a quick start by besting Charlie Dolan (Glastonbury Hills CC) 4&3 to advance to the quarterfinals.

In the afternoon Elia had to work a little harder. Facing fellow Silver Spring CC member Chris Lang the match went to the 17th hole before Elia secured a 2&1 victory to move onto the semifinals. Elia jumped out to a 4 up lead after 10 holes but Lang hung tough winning the 12th and 13th holes to extend the match. Steady golf from Elia on Nos. 14-17 were good enough to close out the tilt.

In Wednesday morning’s semifinal, Elia will face the five-seed Sebastian Beaver (EClub of Connecticut). Beaver began his day with a hard-fought 1 up win over Andrew Flynn (The Patterson Club) then in the afternoon he easily handled AJ Depaolo (Farms CC) 7&5. Beaver won six of the nine holes on the front nine to take a 6 up lead into the back nine before closing out the match on the 13th hole.

“I am very excited to reach the semifinals. This tournament is at my high school [Ridgefield High School’s] home course so it means a lot to come out and play well. It is close to home so making it to the semifinals is awesome,” said Beaver a quarterfinalist at the Connecticut Junior Amateur last month.

Daniel Casanta (Ridgewood CC) advanced to the semifinals with a 4&3 triumph over Drew Fitting (GC of Avon). Leading 2 up after a victory on the par-3 8th hole Casanta took firm control of the match extending his advantage to 5 up following three consecutive wins to start the back nine. A few holes later he sealed the deal with a match capping par on No. 15.

His opponent will be Charlie Stuhr (Redding CC) who survived a marathon 20 hole match against Nick DiNino (Glastonbury Hills CC) in the quarterfinals to advance. Trailing for much of the match Stuhr birdied the 18th hole to tie the match and then won with a par on the second extra hole. Stuhr reached the quarterfinals with a 4&2 Round of 16 victory over Brett Richards (CC of Darien).

In the Girls Division top-seed Mia Holbrook, playing on her home course, handled Leslie Li (Tumble Brook CC) by a 4&3 tally. Trailing early Holbrook tied the match with a par on the par-4 4th, the first of three straight wins to flip the match in her favor. Leading 2 up at the turn Holbrook won the downhill par-3 10th with a par to extend her lead and then after Li chipped into the deficit with a win on No. 13 she closed in a flurry by winning Nos. 14 and 15.

Her opponent will be Lydia Welborn (Golf Performance Center) who outlasted Kenna Roman (Shuttle Meadow CC) 4&3. On the front nine Roman kept herself in the match thanks to her flat stick but on the back nine the steady play of Welborn finally wore her down.

Welborn took the lead on the par-5 11th with a par and never looked back as the win jump-started a string of four consecutive hole victories to turn a tight match into a comfortable victory.

“I think we were both playing well for most of the match,” Welborn said. “On the front nine she was making her putts and I was missing them but I was getting on the green so I think by the time we started breaking the tie was when I started making my putts and that helped a lot.”

For Welborn, who is playing in the Borck Junior for the fourth time, tomorrow will mark her second semifinal appearance. However, this time she will be looking to take her run one step further and reach the title match.

“I am really excited, since I have never played in the championship, I am hoping I can win my first match,” said Welborn who will be a freshman on the Mississippi College golf team in the fall. “I didn’t get to play in this event last year and this is my last year playing in the event so I really want to win.”

Levitt was in control of her quarterfinal match against Zorah Williams (Stonington CC) from the start. The 14-year-old won Nos. 2-4 to take a 3 up lead and spent the rest of the day padding her advantage eventually winning 5&4.

In one of the tightest matches of the day Gross survived in 19 holes against Charlotte Wagner (CC of Fairfield). The match seesawed back and forth with Wagner leading 2 up early only to watch as Gross swung the match in her favor by a 2 up margin after 12 holes. Unfazed Wagner put together a rally of her own winning Nos. 13 and 16 to tie the match with two holes remaining. The match was tied after 18 holes and it wasn’t until Gross won the 19th hole, the par-4 1st with a bogey, was someone able to secure a spot in the semifinals.

The 52nd Borck Junior will conclude on Wednesday. The final day of play will begin with the semifinals at 7:30 a.m. followed by the championship matches.