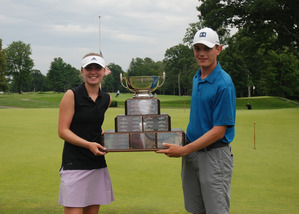 Home course advantage proved to be a difference maker this week at the 52nd Borck Junior hosted by Silver Spring Country Club. Both winners, Alex Elia and Mia Holbrook call the club home and made certain that they defended their turf.

In the Boys Division, co-medalist Alex Elia began his day with a 4&3 semifinal win over Sebastian Beaver (EClub of Connecticut). Elia won four of the first seven holes to take control of the match.

His opponent in the title match, Charlie Stuhr (Redding CC), needed extra holes for the second straight match to earn his spot in the finals. In a match that never saw a player lead by more than one hole Stuhr got the better of Daniel Casanta (Ridgewood CC) in 20 holes.

Riding the momentum of his semifinal victory Stuhr came firing out of the gates in the championship tilt winning the first three holes to take a 3 up lead. Elia was not fazed. He won Nos. 4 and 5 to draw within 1 down and then the 8th and 9th holes to move in front.

“I just thought to myself it is just the first three holes and there are still 15 to play,” Elia said of the early deficit. “My goal was to get at least to even heading into the back and I was able to do one better and go 1 up.”

Once in front, Elia didn’t look back. On the 165 yard downhill par-3 10th he stuffed his eight-iron tee shot to inches for a conceded birdie to move his advantage to 2 up. Following a series of ties he won the par-3 15th with a par to go 3 up and then closed out the championship one hole later.

“It is special to win an event on my home course,” a smiling Elia said of his 3&2 triumph. “Just to win an event period [is exciting]. I have been so close to winning the last four years and to finally get it done it feels really good.”

Results
In the Girls Division Mia Holbrook bested Jordan Levitt 2&1 to earn the title. “It is the best, this is the best feeling,” Holbrook said of winning at home. “Winning any tournament is great but I think being at my home course, this is so cool, this is the best experience I could have asked for."

Holbrook, the medalist, reached the championship match following a hard-fought 21 hole victory over Lydia Welborn (Golf Performance Center) in the semifinals while Levitt (Rockrimmon CC) punched her ticket with a 2&1 win over Ava Gross.

Levitt, who has only been playing golf since March of 2020, got off to a good start winning the opening hole but her lead didn’t last long as Holbrook tied the match on No. 3 and then took the lead for good with a victory on the par-3 8th hole. Her victory on No. 8 was the first of three straight wins to push her advantage to 3 up with eight holes remaining.

However, Levitt wouldn’t go away quietly. She won the 11th hole and then the 14th to draw within 1 down. With the crowd growing Holbrook stuffed her tee shot into the short par-3 15th leading to a win and a 2 up lead. Levitt would have an answer winning the ensuing hole to again be just 1 down with only two holes remaining.

Off the tee on the par-4 17th, it looked like the match could end up tied heading into the final hole. Levitt found the fairway while Holbrook ended up on a slope above a fairway bunker. Faced with a difficult shot Holbrook played possibly the shot of the day landing her approach shot just short of the green and then watched as it ran onto the back portion of the putting surface 25 feet above the pin.

Both players left their third shots short leaving them with testers to save par. Levitt played first and burned the edge giving Holbrook a chance to seal the deal. Facing a four-foot downhill par putt she did just that. Moments after the ball left her putter she raised her arms in celebration and watched as the putt slammed into the bottom of the cup. The Silver Spring CC sweep was complete.

“[Alex and I] are close friends so we really wanted to win this and pick up the trophy together. When I heard he won on I was on No. 14 and I was like alright I got to go out and do it. I have to bring it home too. For me to win on my home course is cool but for me to have one of my best friends win on my home course as well is so cool.”