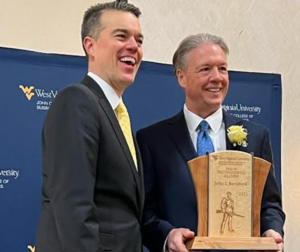 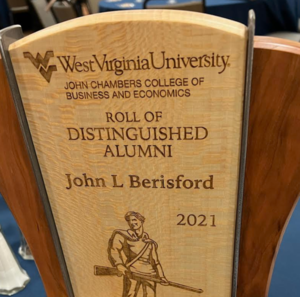 The University writes, “Berisford moved a significant distance from his native Moundsville, West Virginia to lead an international financial information and analytics corporation with over 70 offices across 35 countries.”

Berisford has served as president of S&P Global Ratings since 2015. Prior to joining S&P, he held leadership positions for 22 years at PepsiCo.

Each year, the John Chambers College of Business and Economics at West Virginia University recognizes outstanding graduates through induction into its Roll of Distinguished Alumni.

Berisford, who earned his master’s degree in labor and industrial relations from WVU and a bachelor’s degree in political science from West Liberty College, is part of the University’s 11th class of exceptional alumni - leaders in financial information, law, technology and higher education.

Berisford accepted his award at a celebration and awards ceremony on Friday, March 25  Morgantown WV.

Noteworthy: on the heels of this prestigious award, both Lori and John will be honored by Fairfield University with the Parent Leadership Award at the 2022 Fairfield Awards Dinner which takes place on April 20 at Cipriani 42nd Street in New York City.

Read more about the award here.

Lori and John’s daughters, Liza and Lane, are both Fairfield graduates.

We are fortunate John and Lori Berisford call Ridgefield home!