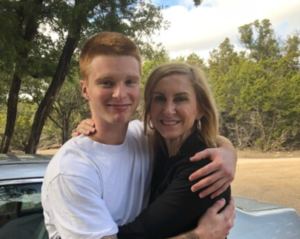 With profound sadness we mourn the passing of our dear son, brother, and stepson Timothy Patrick Davis. After a long and courageous battle with addiction, he ultimately succumbed to the disease from an accidental overdose. Words cannot express how much we will miss him, yet we are at peace that he is no longer in pain and is in the arms of our Lord in Heaven.

Timmy was born in Ridgefield Connecticut and spent his early years there until we moved to Austin, Texas. He enjoyed his rural backyard with his sister, friends, and parents. He loved anything that involved sports, animals, and nature.  Upon catching his first fish in the backyard pond, he held it up with real pride and was determined to take it off the hook himself. He loved chasing his mom and sister with big bullfrogs he caught in the same pond. He adopted several wounded birds, and even a mouse that he nursed backed to health.

Timmy seemed to have an endless group of dogs to play with, whether they were his or someone else’s. He knew the name of every dog in the neighborhood he grew up in and they knew him too! He adored his faithful dog Scooby; they played, swam, and slept together.

On his 8th birthday, Timmy had a farm animal party that he talked about for years to come. He loved skateboarding and biking through the neighborhood.  He excelled at Lacrosse, Football, and Ice Hockey; he was so happy that one day he kicked three 30-yard field goals.

We remember him coming home from summer football practices and devouring huge steaks after.  Playing the drums was another favorite hobby of Timmy’s.  He participated in the middle school talent show where he had a 5-minute slot but detoured into a very thunderous drum solo that lasted just 1 one minute and left the audience stunned!

He attended Lake Travis TX schools and grew to love Texas and the laid-back culture of Austin. He scootered and walked the trails downtown where he adopted another dog (Scarlett) from the shelter.  He also developed a liking for southern food like fried chicken, barbecue and biscuits and gravy. He even had a tattoo of the state of Texas on his leg.

He worked as a construction apprentice remodeling homes where he built skills in carpentry, plumbing, and demolition.  He felt pride and a sense of accomplishment in his work, rebuilding, remodeling, and rehabbing homes.

While growing up he always dreamed of having a baby brother and he finally got his wish when his brother Connor was born in 2018. Connor was the joy and light in Timmy’s life; Timmy was Connor’s hero. They were inseparable, be it sitting in Timmy’s car blasting tunes, shooting Connor’s first nerf gun, reading stories, or just having brotherly wrestling matches. “Where’s Timmy?” was the all too frequent call out from Connor and it continues even now.

Timmy’s sister Emily was the first audience to his playful personality. He would always look for a way to make her smile and laugh. He entertained her his whole life and while his crazy antics were a lot to take at times, he was the only one who could get her to break down into peals of laughter. Timmy was also a strong defender of Emily and enjoyed reminding her that his tough guy side was available should she ever need it.  As they grew into adulthood, Timmy preferred to be the BIG brother to her, and she always knew that if she ever got into trouble, he had her back.

During the last year, Timmy lived with both his parents, his little brother Connor, his stepmom Kate, and his mother’s fiancée Michael allowing him to see his sister Emily more often. This time was treasured by both Timmy and his family who are grateful for the lovely memories.

Timmy was blessed with charm, a quick wit, gorgeous blue eyes, the best hugs, and a beautiful smile that could melt your heart. You would never find Timmy in old smelly clothes. He was never without a good haircut, flossed teeth, fresh breath, and nice cologne.

He had a keen sense of humor and could hold court like a standup comic. All who knew him referred to him as smart, hilarious, sweet, and silly. He made everyone he met laugh while being respectful to all. He was always able to do a spot-on impression of anybody he encountered; he would nail it after just one meeting, mastering the voice, body language and facial expressions of all he met, resulting in friends and family rolling in laughter at this random talent.

Timmy leaves behind his father Tom Davis, his stepmom Kate Davis and brother Connor Davis of Dripping Springs, TX and his mother Christine O’Brien of Austin, TX and her fiancée Michael Shirk of Austin TX, and his sister Emily Davis of Austin TX. He was predeceased by his grandparents Jack and Claire Davis of Stratford CT and Marilyn and Sylvester O’Brien of Tappan NY. He is also survived by numerous aunts, uncles, and cousins on both sides and many friends.

Timmy has given us memories we will cherish for the rest of our lives. He had a tender heart and gave great laughter to everyone. He was taken from all of us way too soon. We want everyone to know we believe substance abuse is not something to be ashamed of or hidden. It’s a disease that must be brought into the light and fought by everyone. Our Timmy fought bravely, and we did too. We believe Timmy is at peace, but the void left by his beautiful presence will never diminish. We will love and miss him more than anyone can ever realize. We have faith that we be reunited with him.

Timmy would ask that you remember him in the good times, laugh and smile when you think of him and know that he loved you and is looking out for you from above.

During this past year of Tim being back in Austin, his family received amazing support from the “Winning the Fight” organization (WTF - learn more here). WTF helped get Timmy and his family the support and resourced to assist in his recovery. In lieu of flowers or other offerings, please consider contributing to WTF to help others still fighting the fight. Click here.