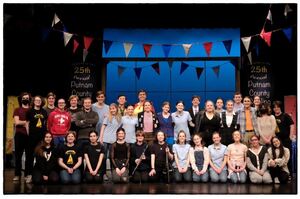 After a successful return to live performances and enthusiastic, full capacity audiences, the Ridgefield High School 2021-22 theatrical productions of “All in the Timing” and “The 25th Annual Putnam County Spelling Bee” received a combined 14 nominations for the 19th annual Halo Awards.

The Halo Awards are presented annually by Seven Angels Theater of Waterbury and celebrate the best of high school theater in Connecticut. More than 70 high schools throughout the state participate, and in a return to pre-pandemic form, the awards will be presented live at the Palace Theater in Waterbury over three nights.

Ridgefield High School’s achievements will be recognized in a ceremony at the Palace Theater in Waterbury on Tuesday, May 31..  Tickets may be reserved by visiting www.sevenangelstheatre.org.

Photo Caption:  The cast, crew and orchestra of “The 25th Annual Putnam County Spelling Bee,” nominated for nine 2022 Halo Awards. The ceremony will take place on May 31 at the Palace Theater in Waterbury.