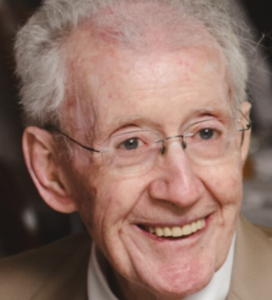 Gordon L. Walsh Jr., age 92 of Ridgefield, passed away peacefully at home, on August 12, 2022. He was the loving husband of Joan Oliver Walsh.

Gordon was born on September 24, 1929, in Norwalk, CT; son of the late Louise and Gordon Walsh Sr., Gordon graduated from Greenwich High School and University of Missouri after which he attended the U S Army Officer Candidate School and was commissioned a Second Lieutenant in the Medical Services branch. From 1952-1954, he was assigned to the Army’s 1st Infantry Division, based in Schweinfurt, Germany. Following military service, he was employed with the Aetna Insurance Company in Schenectady, NY, where he met Joan on a blind date set up by a former Army buddy. They married a year later in June 1956 in Albany, NY.

In 1965, he and Joan relocated to Ridgefield to raise their growing family. Gordon joined with his father, Gordon, Sr., in the Gordon Walsh Agency, which Gordon, Sr. had established in 1948. A resident of Ridgefield ever since, Gordon was a real estate broker and insurance executive. From the late 1940s until the early 2000s, The Gordon Walsh Agency was a Ridgefield Main Street landmark, located next to Town Hall. It was often added to paintings and murals detailing the center of Ridgefield.

He served a term as President of the Ridgefield Board of Realtors and for many years served as a Ridgefield Rotarian. He coached little league baseball and was a long-time youth ice hockey referee. Gordon was a long serving eucharistic minister and a faithful member of St. Mary's Catholic Church in Ridgefield.

Gordon’s universe was his Family. He loved planning summer trips, whether at the beach in New Jersey or driving across the country and visiting national landmarks. He also spent countless hours on the sidelines or in the stands cheering his children and later his grandchildren through all types of sports, scouting, extracurricular school events and activities all throughout their lives. From baseball’s Little League fields in the ’60’s and 70’s, then with his grandchildren back to Little League and soccer fields and the RHS swimming pool, RHS basketball court, RHS ice hockey rink, dancing recitals, school plays, always cheering-on or offering a shoulder for comfort. The next generation, wherever they are, will miss the best coach and cheerleader ever.

A Mass of Christian Burial will be celebrated on Monday, August 22, 2022, at 1:00 PM at St. Mary's Church; 55 Catoonah Street, Ridgefield. Interment will take place privately, there will be no calling hours.

Contributions in Gordon's memory may be made to the Alzheimer’s Association, http://www.alz.org

Kane Funeral Home is in care of arrangements.