Behind the scenes at the Prospector with Mike (Munchie) Santini, Executive Director 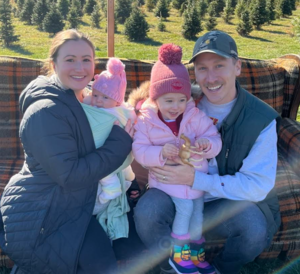 The Prospector Theater opened its doors in Ridgefield on November 20, 2014, with a mission of providing competitive and integrated employment to people with disabilities through the operation of a premium, first-run movie theater.

Founded by Ridgefield resident Valerie Jensen, employees of the Theater are known as Prospects. Approximately 75% of the Theater’s workforce self-identify with a disability. Since its founding, more than 300 Prospects have clocked 800,000 hours of meaningful employment.

In May of 2021, Jensen announced Mike (Munchie) Santini as the new Executive Director of the growing theater.  The lifelong Ridgefield resident, who has been part of the Prospector family since the year of its founding, began his professional career at a D.C. non-profit using hip-hop as a tool for social change before he returned to his roots and successfully took the start-up theater to new heights.

Here, we hope you get to know a bit more about Munchie, what his role as Executive Director entails, and his vision for the future of the Prospector.

What makes the Prospector unique is our belief in the power of sparkle. I will continue to carry that torch alongside my fellow Prospects, so that my daughters - and future generations to come - can enjoy a sparklier tomorrow

I bet there are tons of heartwarming and life-changing stories about the Prospects and the Theater. Can you share one?

Certainly! I’ll share my own. I was born and raised in Ridgefield (go Tigers!). After high school, I spent some time in the DC-area. The thing that brought me back to Ridgefield was the Prospector. Eight years later, here I am: married to the most incredible woman, two beautiful and healthy daughters, with arguably the greatest job on the planet. I feel incredibly fortunate to be a part of the Prospector family, and to raise my children in my hometown, surrounded by the best people I know - Prospects.

What does a typical day in the life of Munchie look like?

What I love about my job is that every day is totally different. In the morning, we could be welcoming hundreds of students for service learning. By afternoon, we’re filming a rap video about our popcorn. And later, it’s all hands on deck for a busy night of movie-going. Through my job at the Prospector, I’m able to write, sketch, rap, experiment, design, and learn - it’s a true creative playground.

How many Prospects are on your team?

We currently employ 123 Prospects. Approximately 75% of us self-identify with a disability. Our employment is competitive and integrated, meaning Prospects work at every level of our operation - from box office to bookkeeping, projection to video production, graphics, grants, gourmet popcorn, and more. Some of my favorite jobs include researching, service learning, ushering, and production!

What is the biggest misconception people have about Prospector?

That we’re just a movie theater. The Prospector is so much more. The ultimate Jedi mind trick - to use a favorite movie reference of mine - is that the Prospector is a first-run theater. Yes, the Prospector plays movies, but we also sell popcorn on a dedicated e-commerce site, run a landscaping business, advise employers and Hollywood on best practices, publish our own music, embroider our uniforms, develop our own software, host thousands of students for educational programming each year - the list goes on and on. The Theater-space gives us a customer-facing business to educate audiences AND a place to experiment with new jobs, technologies, and opportunities.

What do you want your legacy as Executive Director to be?

What makes the Prospector unique is our belief in the power of sparkle. I will continue to carry that torch alongside my fellow Prospects so that my daughters - and future generations to come - can enjoy a sparklier tomorrow.

Learn more about the Prospector, purchase some popcorn (best holiday gift that gives back), find out what’s on screen (and purchase movie tickets) here.