Employed, Engaged, & Excited for the Next Journey - Aaron’s Prospector Story

Details
Published on Tuesday, 17 January 2023 08:28
Written by The Prospector 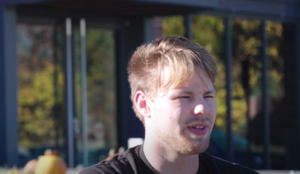 Meaningful work is a vehicle through which we can grow, dream, and transform our lives. For many, the road to employment is filled with roadblocks and detours, revving up feelings of frustration, isolation, and insecurity. However, with the right support, and a drive to succeed, a job can help us reach our dream destination. That’s exactly what former Prospect Aaron Miller is doing with his life.

Aaron’s journey at the Prospector began over eight years ago. As a high schooler, Aaron worked nights and weekends as an usher, concessionist, and member of the Prospector’s Clean Team. The team at the Prospector soon discovered Aaron’s sparkle - or talents and passions. It was ultimately Aaron’s introduction to the Facilities team that sparked a passion for hands-on, hard work. Through performing regular maintenance and repairs around the Theater and grounds, Aaron began to shine - keeping the property in tip-top shape. From touch-up painting to landscaping, cabinet-making to concessions repairs, Aaron established a reputation as a handyman-extraordinaire.

His technical and mechanical skills led him to Gemstone Farm - a working farm in Connecticut that partners with the Prospector to create competitive and inclusive employment opportunities for people with disabilities. Gemstone’s operation spans over 160 acres and features a garden, orchard, beehives, lakes, ponds, chickens, goats, sheep, pigs, and much more. With plenty of farm machinery and vehicles needing maintenance and upkeep, Aaron became a vital part of the Gemstone program.

The road before Aaron became clear. He put the pedal to the metal and began automotive school. Prospector’s Facilities Manager, Steven St. Germain saw the wheels turning for Aaron, and helped him kick it into high gear. “We had talked about his internship in order to get his auto mechanics license,” recalls St. Germain. “I encouraged him to pursue this to start his career and dream of working on cars. We had conversations about the future; how to save money, the importance of following your dreams while you're young, and well, leading that good life.”

A few months later, Aaron had big news to share with Steve. “One day he came in and told me he had gotten his internship and was planning a move to Florida,” says St. Germain. But there was more. Aaron proposed to his longtime girlfriend and they were moving to Florida to build a life together and pursue Aaron’s dream of becoming an automotive mechanic.

“We’re so proud of him and how much he’s grown,” says Jane Swiatek, head of the Prospector’s Clean Team. “I am so proud and honored to have worked alongside Aaron.” The team at the Prospector will certainly miss seeing Aaron around the Theater, fixing and tinkering, working and smiling. They’re sad to see him go, but excited for the new opportunities and life he will build.

“Between the time he told me about his plans and his leaving, we had conversations about the future,” remembers St. Germain. “How to save money, the importance of following your dreams while you're young, and well, leading that good life. The life we all want for ourselves, for others, wish for others.”

Aaron is in the driver’s seat, on the road to the good life. Enjoy the ride, Aaron!

Learn more about The Prospector www.prospectortheater.org