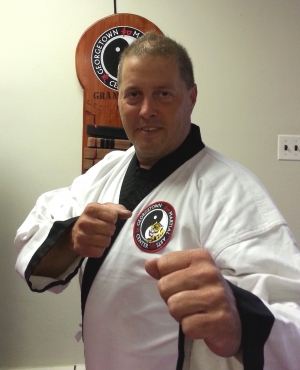 The martial arts studio, opened originally in 2001 by Ennis Warren, Phyllis Rhodes and Bill Hackett, has always focused on providing children and adults with family-friendly training in kempo karate, kung fu, and tai chi. New owner David Chapman is continuing in the same family-focused tradition as the original owners, and the hand-off to the new management has been quite seamless. Sensei Dave will continue to teach kempo karate at all levels, allowing students to benefit from his knowledge of other martial arts styles as well.

Sensei Dave began his own martial arts training at the age of 9. He studied the arts of Tang Soo Do, Uechi-Ryu in which he holds a black belt.  Mr. Chapman also holds a brown belt in Tae Kwon Do and has studied kempo karate since 1994. Furthermore, he earned the rank of 3nd degree black belt under Sensei Vincent DeStefanis in 2012 and holds a black sash in Black Tiger Kung-Fu, also earned under Sensei Vincent. Before coming to Georgetown Martial Arts, he was an assistant instructor at the D.E.S. Training Center, a martial arts school in Stratford.

In addition to the scheduled martial arts classes, Georgetown Martial Arts holds regular clinics for students or groups of all ages and abilities, as well as staging fun birthday parties for kids.

For information about programs and schedules, please visit the studio’s website, www.georgetownmartialarts.com, or call the office: 203-587-1265.