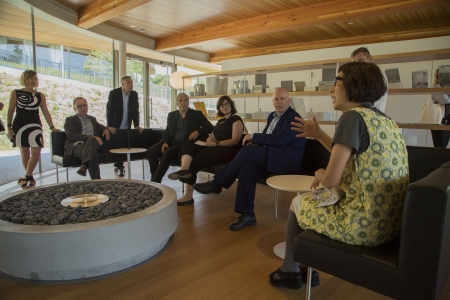 Grace Farms has been nominated for the Mies Crown Hall Americas Prize (MCHAP), an international architecture award established at the Illinois Institute of Technology. The prize is named for preeminent modernist Ludwig Mies van der Rohe, a former director of the Bauhaus who came to the U.S. in 1937, and headed the architecture department at IIT. Dean Wiel Arets of IIT’s College of Architecture, MCHAP Director Dirk Denison, and MCHAP 2014/15 Jury President Stan Allen announced the MCHAP Finalists at an event held at the Museo Tamayo, Mexico City, the evening of June 23rd. Grace Farms, designed by SANAA, is one of seven finalists for the prestigious architecture prize, and one of two in the U.S.

“Sejima, Nishizawa and I are honored and encouraged by Grace Farms’ selection as a MCHAP finalist, acknowledging a new type of public space,” said Sharon Prince, Grace Farms Foundation President. “From the beginning, Grace Farms Foundation set out to create an experience where people could freely choose to enjoy the landscape, foster diverse community, come together to pursue justice, explore faith and encounter the arts. Kazuyo Sejima and Ryue Nishizawa of SANAA completely understood the social and spiritual potential of this concept, and the collaborative result is now generating outcomes for the greater good.”

The MCHAP is a biennial award; this year’s prize honors the best built works of Architecture in the Americas completed during 2014 and 2015.  SANAA’s design for Grace Farms is one of a group of finalists that include: a house in Lima, Peru, by Angelo Bucci; the Pachacamac Museum in Lima by Llosa Cortegana; Tower 41 in Mexico City, designed by Alberto Kalach; Star Apartments in Los Angeles, designed by Michael Maltzan, and the Fort York National Historic Site Visitor Centre in Toronto, Ontario, designed by Patkau Architects/Kearns Mancini Architects. The winner of the MCHAP Prize will be announced on October 19 at a symposium at the Illinois Institute of Technology.

Kazuyo Sejima, Principal of SANAA, and Prince were present this weekend as the MCHAP jury visited New Canaan to view the River building, the renovated barns, and the preserved 80-acre landscape of Grace Farms. The building was designed to be fully integrated with the landscape and to allow the site around it to be preserved as a diverse natural habitat that includes meadows, ponds, woodland, wetland, and numerous varieties of flora and fauna.

The news of the MCHAP nomination comes soon after three recent awards for Grace Farms. Lighting design engineers BuroHappold recently won a Lumen Award, sponsored by the Illuminating Engineering Society of New York City, for their work throughout the River building and the site at Grace Farms. In mid-June, the Greater New York Construction Users Council (GNYCUC) presented to Sciame Construction, Roschmann Steel & Glass and Grace Farms Foundation their 2016 honor in the category of Public Space. Grace Farms Foundation was also honored in Ridgefield, Connecticut, this March with a TownVibe Green Award in the not-for-profit category. The Green Awards recognize businesses, not-for-profits, and individuals that are leading the local fight to protect the environment while also creating a sustainable social and economic community.