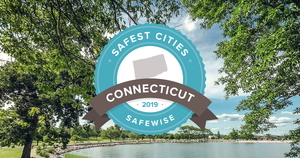 SafeWise, a digital company specializing in home security and safety, recently announced the 2019 Top 20 Safest Cities in Connecticut, and the Safest Cities in America, based on Uniform Crime Report (UCI) from the FBI.

Ridgefield tops the list in Connecticut moving up from the number two spot in 2018. “The city has zero counts of violent crime to thank for its upward climb,” SafeWise says.

But, that's not all folks (and this is BIG), according to the report, Ridgefield is the second safest city in America! Read all about it here.

SafeWise says, "Thirty percent of America’s 100 safest cities are in New Jersey. Connecticut claims second place with 14, and two of those are in the top three."

SafeWise gives high marks to Connecticut’s overall safety. “There were only two murders reported among all 20 cities that made the list. Overall, the Constitution State is well below national averages for both violent and property crime. Proving the point, 95% of the cities on our list saw fewer than one violent crime per 1,000 people, according to FBI data,” they say.

Learn how SafeWise identified the safest cities by visiting their methodology page.