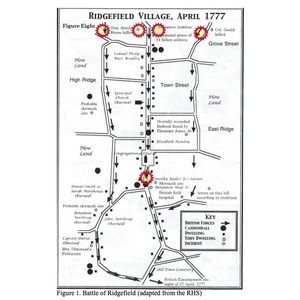 The Ridgefield Historical Society has selected Heritage Consultants LLC of Newington, whose principals have extensive experience with historical sites in Connecticut, to conduct research into the Battle of Ridgefield under the Society’s National Park Service American Battlefield Protection Program (NPS ABPP) grant.

The Historical Society, in partnership with the State Historic Preservation Office (SHPO), applied for the grant last year; the contract with the consulting group is the latest step in the effort to more fully understand the participants and locations of Battle of Ridgefield events.

Dr. Kevin McBride, David George and Dr. David Naumec are the leads on the project. Dr. McBride has more than 40 years’ experience in Colonial and Native history and the archaeology of southern New England; he has directed 14 NPS ABPP projects in Connecticut, Massachusetts and Rhode Island. Mr. George has 30 years’ experience in southern New England archaeology; he has focused on Connecticut in the late prehistoric, Contact Period, and early historic periods. He also has been involved in researching and excavating at Revolutionary War-era residences and at Fort Griswold in Groton. Dr. Naumec has 20 years’ experience in Colonial and American history and specializes in African and Native American history, American military history and Connecticut history. He has served as military historian and field coordinator on 14 NPS ABPP projects with Dr. McBride.

The Battle of Ridgefield took place on April 27, 1777 when a force of 2,000 British soldiers under New York’s Royal Governor Major General William Tryon marched into Ridgefield on their way back to ships off Westport after the British had destroyed Continental Army supplies in Danbury. Following skirmishes north of the village, the main battle took place at a barricade the patriots had assembled across north Main Street. Led by General Benedict Arnold, the American forces were overrun by the British and retreated to regroup and attack as General Tryon’s troops arrived in Westport to re-embark the next day. The British had camped overnight just south of the Ridgefield village.

Heritage Consultants’ work will include historical research of relevant military, Colonial and Revolutionary War documents, interviews with knowledgeable individuals, local informants and landowners; review of secondary sources related to Battle events; historical archaeological research; military terrain analysis; Global Positioning Systems and Geographic Information Systems applications; and windshield and walkover surveys of the Battlefield Study and Core Areas. In analyzing the Battlefield, one of the key goals will be to identify and describe the natural and cultural features that were present in April 1777 so that it can be determined how they were used by both the British and American combatants.

Throughout the project, Heritage Consultants will work with the Historical Society’s  Battlefield Advisory Group, and will give regular reports to that group in meetings and through other communications; the Consultants will share information with the community as a whole via the Ridgefield Historical Society website, https://ridgefieldhistoricalsociety.org, as well as through public informational meetings.

Among the new avenues of research related to the Battle of Ridgefield, State Historian Walter Woodward, a member of the Battlefield Advisory Group, has encouraged study of the political divisions that split communities like RIdgefield before and during the Revolutionary War. One theory is that the British chose to march through RIdgefield because it was home to a number of Tories and possibly persuadable residents who might find the British show of force impressive. The Consultants also plan to explore the participation and contributions of African and Native Americans, whose role is often overlooked and hard to establish.

A final report is scheduled to be completed by the end of December, 2021; copies of all research materials will become part of the Ridgefield Historical Society’s permanent collection and will form the basis for further battlefield research.

For more information, email This email address is being protected from spambots. You need JavaScript enabled to view it. or call 203-438-5821.