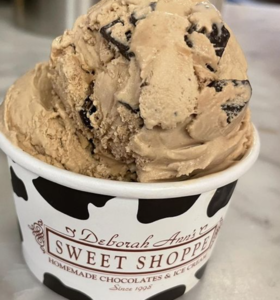 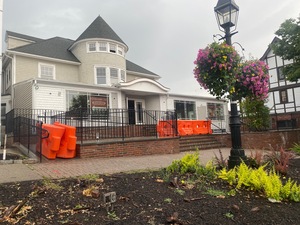 Downtown Ridgefield is about to get SWEETER!

Here, HamletHub intern Carolyn Neugarten sits down with Deborah Ann to get the SCOOP on the plans for the upcoming move [plus: Mocha Chip is BACK, and plant-based ice creams are plentiful]. Read on!

Was this expansion something you’ve been anticipating for a while now? Or did it come to you as a surprise?

We always wanted to own our own space. We love our location now and wouldn’t want to go just anywhere, so when we saw this beautiful old building at 409 Main Street, a block away, we thought it was a very great opportunity - one that doesn’t come up very often!

We are planning to make the building more retail friendly. Before it was mostly just office space, so we wanted to make the area more accessible for customers. The original building was built in 1880, so it was a lot of work. The floors were all different heights!

What will be the differences between the two locations?

We have a little more space. It’s also going to be laid out a bit differently. When we moved here, we were only in the space where of all the chocolates are. We sold Mr. Shane’s ice cream in the back, and we had one case of 12 flavors.

When the other half (of the space) became available, it turned out to be the exact time Mr. Shane was retiring. We decided we’d like to make our own ice cream just like Mr. Shane did. We didn’t want to go out and buy pre-made ice cream.

The building we are moving to is actually the home of the original Mr. Shane’s Ice Cream!

Any other big changes with the menu?

When we move we will have all the flavors available. Mocha Chip has been moved for a couple of weeks, as part of a rotation. We’ve added some non-dairy ice cream, like Coconut Milk, and we have a very new plant-based ice cream. We also have sorbet and Italian Ices, but every time we add something we have one less spot. All the flavors are good, so it’s hard to move them around.

Mocha Chip is coming back (!!!), and we are making more plant-based ice creams.

Can you share with us the timeline of the opening?

I think it may be September 2022 or late summer.

What were the other locations of Deborah Ann’s?

It’s going to be our 24th Anniversary on September 1st. We were originally over by the Ancient Mariner, and we only had soft serve ice cream. We moved to Main Street in 2006, and then we started making our own ice cream and introducing more flavors in 2011.

Are you excited about the move?

Yes! This will be our last move, we are just trying to recreate exactly what we have. The layout of the space is slightly different, but we want to keep the same idea and the inside will be the same as well.

What do you love about working here?

People are here to treat themselves or get gifts for others, it’s all joy. The kids come back with their families, our former employees come back too. We just had an employee come in today to introduce us to her baby!

And finally, what is your absolute favorite flavor?

The Toasted Coconut ice cream, an old Mr. Shane's. We still use his recipes!

Our story begins as young, idealistic Yale law students, where we met and hoped to go on to make the world a better place.

But after six years in the New York corporate world we knew we needed a change.

Deborah, inspired by childhood memories of her mother making chocolates in the kitchen, suggested a homemade chocolate shop in Mike’s hometown of Ridgefield, Connecticut.

Mike thought she was crazy. Until she took him to a small, homemade chocolate shop in Manhattan.

The store was filled with the delicious aroma of chocolate and there were cases full of freshly made chocolates. Wide-eyed children came in with their families, excited to try those wonderful looking confections.

This was a place that made people happy.

Mike was convinced and so we put the same effort we’d put into learning the law into learning everything we could about chocolate and candy making, determined to make chocolates we would be proud of.

To this day, we’re still learning and experimenting, always with the goal of making the best chocolates and ice cream anywhere.

If you stop by the shop, you can enjoy some of our signature creations like our take on mint chip ice cream, Mint Patty (made with our own homemade mint patties), or our Peanut Butter Crunch chocolate.

Of course we can't ship our ice cream, but we CAN ship the chocolates that helped get us named Best Chocolate Shop in Connecticut by MentalFloss.com.

When we met in law school, we wanted to make the world a better place.

Only now, we try to do it every day by bringing a little fun, joy, and deliciousness to our customers!