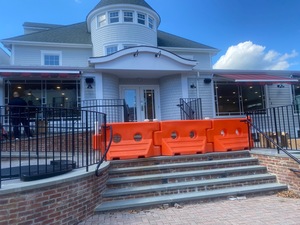 Downtown Ridgefield is about to get SWEETER!

We snapped this photo today of an attractive awning being placed on the future home of Deborah Ann's Sweet Shoppe, the historical building at 409 Main Street. We contacted Deb today and she has not set an opening date (yet) but by the looks of things, Ridgefield will be falling for ice cream and candy at 409 Main Street soon!

During the summer, HamletHub intern Carolyn Neugarten chatted with Deborah Ann to get the SCOOP on the plans for the upcoming move. Below is a portion of the Q&A. To read the interview in its entirety, click here.

Was this expansion something you’ve been anticipating for a while now? Or did it come to you as a surprise?

We always wanted to own our own space. We love our location now and wouldn’t want to go just anywhere, so when we saw this beautiful old building at 409 Main Street, a block away, we thought it was a very great opportunity - one that doesn’t come up very often!

We are planning to make the building more retail friendly. Before it was mostly just office space, so we wanted to make the area more accessible for customers. The original building was built in 1880, so it was a lot of work. The floors were all different heights!

What will be the differences between the two locations?

We have a little more space. It’s also going to be laid out a bit differently. When we moved here, we were only in the space where of all the chocolates are. We sold Mr. Shane’s ice cream in the back, and we had one case of 12 flavors.

When the other half (of the space) became available, it turned out to be the exact time Mr. Shane was retiring. We decided we’d like to make our own ice cream just like Mr. Shane did. We didn’t want to go out and buy pre-made ice cream.

The building we are moving to is actually the home of the original Mr. Shane’s Ice Cream!

Any other big changes with the menu?

When we move we will have all the flavors available. Mocha Chip has been moved for a couple of weeks, as part of a rotation. We’ve added some non-dairy ice cream, like Coconut Milk, and we have a very new plant-based ice cream. We also have sorbet and Italian Ices, but every time we add something we have one less spot. All the flavors are good, so it’s hard to move them around.

Mocha Chip is coming back (!!!), and we are making more plant-based ice creams.