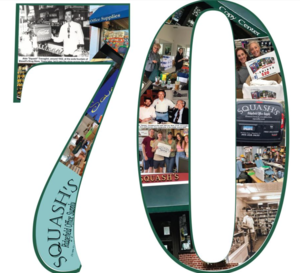 Part of the fabric of our community (since 1953) Squash's (aka Ridgefield Office Supply) has been the go-to place for school supplies, all things printing, stationary, fancy (and not so fancy) pens, and friendly faces! Squash's truly has it all (and at competitive prices).

Since 2016, Squash's has been proudly owned by one of the shop's longtime employees, Whitney Williams. Whitney has continued the tradition of providing the community with hometown service (and over 30,000 office supplies!) Thank you, Whitney!

A blast from Ridgefield HamletHub past - in 2011, Terri Garlick published a historical piece about our local office supply store, better known as "Squash's". The article was titled "Have You Ever Wondered Why Our Local Office Supply Store is Called Squash's?".

We are digging it out of our local story archives in honor of this momentous anniversary! Small businesses matter! Thank you, Squash's!

Now, here's the story behind the name "Squash's".

In the early to mid 1900's, a large number of families in Ridgefield were of Italian descent.  Many of these families had come to Ridgefield as laborers and domestics, and because Ridgefield -- a rural community nestled among ridges of land -- reminded them of their home-county, they decided to stay, build homes, get married, and raise their families.

Like all Italian families of that era, they had well-tended, and over-producing vegetable gardens, and enjoyed garden-fresh produce during most of the year.  And as a gardener know,  if you plant squash in the summer, you get enough to feed your family, your friends and most of your church, too! A boy named Aldo was born into one of these families, and as he grew, he worked at a local pharmacy and soda fountain known as H.P. Bissell's Pharmacy.

Every day, during the summer, Aldo came to work at H.P.Bissell's Pharmacy with his lunch. This lunch came from the family's garden, and it was always squash. Soon, this lad was nick-named, "Squash," and the nickname stayed with him as he grew up. Eventually, Squash was able to purchase a local store for himself, and for about 40 years, he owned and operated "Squash's" on Main Street.  A local business known as a store that had everything you needed, and the best service in the world. Although Squash is no longer involved with the store, Squash's Ridgefield Office Supply has been in business at the same location for over 50 years -- providing Ridgefielders with all their office supply needs and offering the kind of customer service that would still make Squash proud.