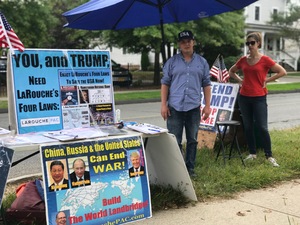 Political activists, both of whom are not locals, set up shop in front of Ridgefield Post Office today. When asked if they received permission to be there, I was told by the female activist, who said she is from New Jersey, "It's public property. We're practicing the 1st Amendment."

Both individuals demonstrating today are part of the LaRouche Movement, a political and cultural network promoting the late Lyndon LaRouche and his four laws.

They said they travel through various towns and states and will likely not be in Ridgefield tomorrow.

We contacted the First Selectman, Rudy Marconi who confirmed that the area where the activists set up is indeed public property.