Rep. Frey and Governor Lamont Work Together to Help the Curran Family Raise Awareness about Their Son’s Rare Disease 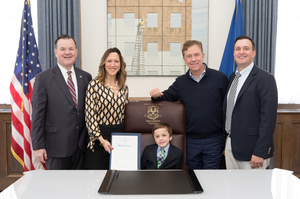 Governor Proclaims World Duchenne Awareness Day in the State of Connecticut; Second state in the country to recognize this important day.

In this season of thanks, Connecticut residents Christopher and Jessica Curran today expressed gratitude to both State Representative John Frey (R-111) and Governor Lamont for working together in a bipartisan fashion to raise awareness about their son’s rare disease – Duchenne Muscular Dystrophy.

The Ridgefield family said they are thankful for Representative Frey’s willingness to champion their cause, and for Governor’s Lamont’s immediate interest to lend his support and promote awareness of the disease.

Despite a slight scheduling delay for the ceremonial presentation, the Curran’s said meeting with Governor Lamont and Representative Frey today to memorialize the signing of the proclamation was moving and an honor.

“We want to thank Governor Lamont for taking the time to meet with us, listening to our family’s story and using his authority to promote awareness of this rare disease by proclaiming World Duchenne Awareness Day in Connecticut,” Jessica Curran said. “Conner was thrilled to meet the governor and to be given a tour of our state capitol by Representative Frey! What an incredible experience he had in seeing how government can work in such a positive way.”

Governor Lamont designated September 7th as World Duchenne Awareness Day and marked Connecticut as the second state in the country to recognize this important day for the many that suffer with Duchenne.

“I’m honored to lend my support to the Currans, and all other families battling this terrible disease, and I’m proud to join with Governor Lamont to promote and increase awareness statewide,” Rep. Frey said.

During a meeting in Governor Lamont’s Capitol office, the Currans shared that hearing the diagnosis of Duchenne Muscular Dystrophy was heartbreaking for them and devastating for Conner, noting that afflicted children are slowly robbed of the use of their muscles. Loss of muscle control typically leads to the necessity of a wheelchair by the age of twelve, followed by the loss of the use of arm movement to eat or even hug their parents, they said. Eventually, in a child’s late twenties, heart and lung muscles start to fail leading to early death.

In response to the devastating diagnosis, Jessica and Christopher Curran poured their hearts into raising awareness about the disease so that the community can better understand how people suffering with DMD struggle due to delays in diagnosis to lack of available treatments. Regrettably, the Curran’s said there are few approved medicines on the market available to treat Duchenne and because of that they have worked to raise more than $800,000 for Parent Project Muscular Dystrophy to advance much-needed research.

Jessica and Christopher have tremendous hope for Conner and all Duchenne patients and they believe researchers are on the cusp of developing new therapies to treat Duchenne. They remain hopeful that a cure will be found soon.

“We truly want to express our gratitude to everyone in Ridgefield, and the entire Connecticut community, who has shown our family such compassion and caring over the last few years,” Christopher Curran said. “We have been overwhelmed by the kindness, and we appreciate the support of Representative Frey, Governor Lamont and the rest of the community who have embraced our family and helped raise much-needed awareness of this rare disease.”