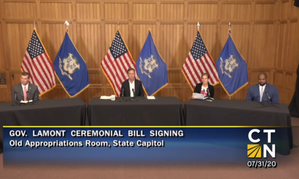 Governor Ned Lamont today announced that he has signed into law policing reform legislation formed to increase accountability for law enforcement whose actions do not represent the values of the state and to increase public trust with police officers.

The long-term issue came back to the forefront this spring in the wake of the tragic deaths of George Floyd and Breonna Taylor, among many others, by some police and law enforcement.

“These reforms are focused on bringing real change to end the systemic discrimination that exists in our criminal justice and policing systems that have impacted minority communities for far too long,” Governor Lamont said. “Ultimately, what we are enacting today are policies focused on providing additional safeguards to protect peoples’ lives and make our communities stronger. Our nation and our state has been having a conversation on this topic for decades, and these reforms are long overdue.”

The governor specifically thanked the co-chairs of the General Assembly’s Judiciary Committee, State Senator Gary Winfield (D-New Haven) and State Representative Steve Stafstrom (D-Bridgeport), for their leadership crafting the legislation and seeing it through both chambers of the state legislature.

The legislation is House Bill 6004, An Act Concerning Police Accountability. Some of the highlights include: