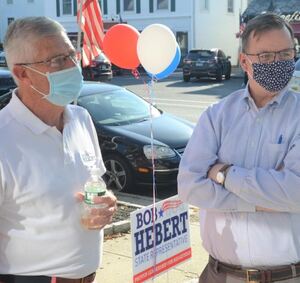 On Saturday, September 12, the Ridgefield Republican Town Committee (RRTC) held its Grand Opening for its election headquarters at 392 Main Street. To celebrate the headquarters' opening, the RTC organized a candidate Meet and Greet for voters to learn more about the Republican candidates running for local positions in November's election. The event was held outside, and precautions were taken to promote social distancing and mask-wearing as needed to ensure all attendees' safety.

The day began with a breakfast event hosted by the RTC and Bob Hebert, who is running to represent Ridgefield in the 111th State District, upon John Frey's retirement. Several dozen voters attended and met with Bob to discuss the local and state issues of most concern to them in this election cycle. Attendee Dean Cohagan said, "I'm here today to talk to Bob about these newly proposed bills that are positioned to take away Ridgefield's control of local planning and zoning. He added, "If folks are worried about traffic congestion and large in-town apartment buildings now, wait until the cities have the overriding ability to decide what housing belongs in Ridgefield."

There was a steady flow of visitors stopping by, picking up yard signs, and getting information about the candidates throughout the day. "It was great to see people out and about shopping on Main Street and dropping by the Grand Opening between their kids' soccer and football games," said RTC Vice Chairman, Rick Matte.

There was a second Meet and Greet event in the afternoon and several additional state candidates mingled with the crowd. Kim Healy, running for the 26th State Senate position, and Jonathan Riddle, who is running for US Representative in Connecticut's 4th Congressional District, joined Bob to meet with voters. Other special guests stopped by to show their support of the candidates, including Toni Boucher and John Frey. "There isn't a better person to represent Ridgefield than Bob Hebert. He has a record of supporting our town for many years in both official and volunteer capacities. He also has the skill set desperately needed in Hartford today." said John.

The event also drew people into Ridgefield from neighboring towns. Wilton resident and former State Senator Toni Boucher said, "Ridgefield's RTC Grand Opening of its Main Street Headquarters was an exciting event. Republican candidates for Congress, State Senate, and State House received enthusiastic support from all the visitors and everyone that walked by. Ridgefield is a warm and caring town and is so fortunate to have some of the best and most qualified people stepping up to represent it and help make Connecticut better."

The RTC Headquarters will be open daily until November 3 for voters to drop in to learn about candidates, pick up yard signs, and get information. To get additional information about, donate to, or volunteer with the Ridgefield Republican Town Committee, go to www.ridgefieldrtc.org.