Details
Published on Saturday, 27 February 2021 07:06
Written by Ms President US 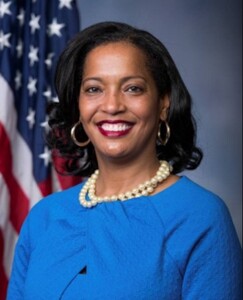 Ms President US held its seventh session on Friday, February 19th focusing on the Federal Government. Special guest speakers House Representative, Jahana Hayes and Director of Operations at the US House of Representatives, Annmarie Goyzueta, joined the Zoom session and spoke with the girls and their mentors.

Each meeting starts with an interactive activity, and this one involved working with mentors to decode license plates spelling out the Preamble of the Constitution. Participants heard a brief introduction to the Federal Government, including activity questions about the purpose of each branch. Maggie Fleuette correctly answered the question of which branch of government has the most power. She stated confidently, “None. That’s called checks and balances. They are all equal.” Considering women makeup 50% of the population, it’s interesting to see women only make up 24% of Congress. The participants shared their opinions on why they thought there was such an imbalance and when they thought it might get to 50% women.

Guest speaker Representative Jahana Hayes joined the call and was introduced by mentor Avni Gupta. Representative Hayes is the first African American woman to represent Connecticut as well as the 2016 National Teacher of the Year Award. Representative Hayes took the call from her Washington, DC office, and there are six participants in the Ms President US program from her district. They were prepared with questions for her, followed by many questions from the rest of the girls in the program. Representative Hayes described how her experience teaching affects her politically, as well as how she views the issues she is currently the most passionate about and the advice she would give to young girls today.

Annmarie Goyzueta, Director of Operations at the US House of Representatives and Social Events Director for the Congressional Hispanic Staff Association, spoke to the girls about what it is like “behind the scenes” of government and her experiences working in politics.
Each session concludes with a group activity quizzing the girls on their knowledge they gained from the session. This session was about the three branches of the federal government, the Line of Succession, and the Cabinet positions. The girls discussed which tenet of the US Constitution they thought was most important (unity, justice, tranquility, defense, welfare, and liberty) before the session, and which they felt was most important after the session.

Ms President US is dedicated to motivating and preparing girls to aim for the highest civil leadership positions. This year’s Campaign and Election will be held over Zoom on March 21st.

Please contact Ms President US via email for an invitation and for questions or more information, please contact This email address is being protected from spambots. You need JavaScript enabled to view it. .