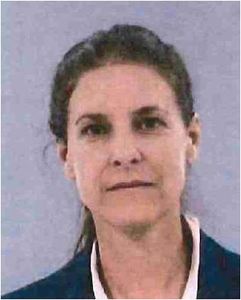 Earlier this afternoon, Michelle Troconis arrived at Troop G-Bridgeport where she turned herself in to detectives from the Connecticut State Police - Western District Major Crime Squad (WDMCS) for an active Felony Arrest warrant for Tampering with or Fabricating Physical Evidence.

The arrest was part of an ongoing joint investigation by CT State Police and New Canaan Police Department into the disappearance of Jennifer Farber Dulos on May 24, 2019 from her home in New Canaan.

She has been processed in connection to the missing person investigation. Since then, she has posted a $100,000 bond and has been released from police custody. She is scheduled to appear in Norwalk Superior Court on September 18.

Jennifer Farber Dulos was last seen on May 24, 2019, when she dropped her children at school in New Canaan. Police located multiple areas in her garage which tested positive for human blood as well as evidence of attempts to clean the scene. A forensic exam yielded possible blood evidence found on the interior and exterior if Jennifer's 2017 Chevrolet Suburban which was found at 7pm on May 24 on Lapham Road, adjacent to the southwest portion of Waveny Park in New Canaan.

The official arrest warrant indicates a residential security camera shows Jennifer's 2017 Chevrolet Suburban driving along Welles Lane toward her residence at 8:05am on May 24 after having dropped her children off at school. The photograph here (#2) is the last known photograph of Jennifer alive.  At the time the footage was recorded, Dulos is believed to have been lying in wait at 69 Welles Lane for his wife to return home.

The crime and cleanup are believed to have occurred between 8:05 am and 10:25 am.

at 10:25 am, residential surveillance on Welles Lane shows Jennifer's Suburban traveling westbound away from 69 Welles Lane. Dulos is believed to be operating the vehicle which is carrying the body of Jennifer Dulos as well as a number of other items associated with the clean up of the garage of the residence. Cellular data obtained from Jennifer's cellphone is consistent with the phone moving from Welles Lane to Lapham Road during this timeframe.