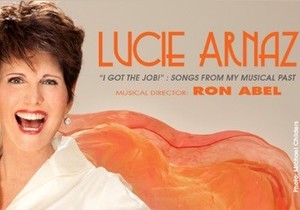 Lucie began her career on television at 12 in a recurring role on The Lucy Show, starring her mother, Lucille Ball.  At 15, she became a series regular on Here’s Lucy.  In 1985 she starred in her own series, The Lucie Arnaz Show, and in 1989 in the critically acclaimed Sons and Daughters, all on CBS.

On film, Lucie co-starred in The Jazz Singer with Neil Diamond and Sir Laurence Olivier, in several made-for-television movies including Who Killed the Black Dahlia, and Down to You. On the stage, Lucie created the role of Kathy in the West Coast Premiere of Vanities at the Mark Taper Forum in Los Angeles before starring as Gittel Mosca in the first national company of Seesaw alongside Tommy Tune. Lucie’s Broadway credits include They’re Playing Our Song, Lost in Yonkers, Dirty Rotten Scoundrels, and Pippin. During her distinguished career, Lucie has received numerous accolades including a Golden Globe nomination, a Theatre World Award, and Chicago’s famed Sarah Siddons award.

Join us for an evening of music and anecdotes from a career that has spanned nearly three decades!

LUCIE ARNAZ with musical director RON ABEL will play the White Plains Performing Arts Center on Friday, September 27 at 8:00 pm. White Plains Performing Arts Center is located on the third level of City Center off Mamaroneck Avenue and Main Street in downtown White Plains, minutes from the White Plains Metro North Station. For tickets visit the theatre box office Monday-Friday (11am-6pm), purchase the tickets online at wppac.com or call 914-328-1600. For Group Sales, please contact  This email address is being protected from spambots. You need JavaScript enabled to view it. .