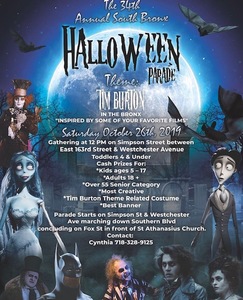 Theme: Tim Burton in the Bronx ("Inspired by some of your favorite films")

34 years ago, a group of individuals under the leadership of Father Louis Gigante began this yearly tradition of celebrating our community by taking back the streets on Halloween. What started from a small group of children has grown into one of the largest Halloween parades in New York City. Each year, the parade has a particular theme that captures the spirit of our community. This year's theme will be Tim Burton in the Bronx (Inspired by some of your favorite films).

Last year our parade was rained out but we managed to have an indoor alternative. The New South Bronx Police Athletic League site allowed us access to their gym where the event was a major success. We took spectators and participants indoors. The showcase featured the participation of community organizations, marching bands, performers, awarding of prizes for best costumes and the distribution of candy bags.

This year, as always, the parade will begin on Simpson Street, between East 163rd Street and Westchester Avenue, at 12:00PM on Saturday, October 26, 2019 and end at Tiffany Plaza (Fr. Gigante Plaza), in front of St. Athanasius Church at approximately 2PM. At this time, we have our costume judging, showcasing of bands and distribution of candy to the children. Please come and join us!

Prizes For: *Toddlers 4 & Under