A Reading and Conversation with Author David Means on Oct. 21 at Purchase College-SUNY 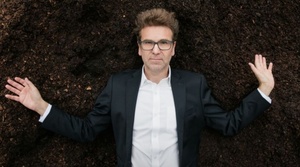 Purchase College-SUNY will present A Reading and Conversation with David Means on Monday, October 21 at 6:30 p.m.

The program, which is free and open to the public, will take place at Purchase College in the Recital Hall of the Music Building (735 Anderson Hill Road, Purchase, NY). The event is part of the Durst Distinguished Lecture Series, which brings leading literary figures to the Westchester community.

David Means is the author of five acclaimed collections of short stories and a novel, Hystopia, which was longlisted for the Man Booker Prize. His second book of short stories, Assorted Fire Events, won the Los Angeles Times Book Prize for Fiction and was nominated for the National Book Critics Circle Award. His fourth collection, The Spot, was selected as a 2010 Notable Book by the New York Times and won an O. Henry Prize. His stories and essays have appeared in The New Yorker, Harper’s Magazine, Esquire, Zoetrope, Best American Short Stories, and many other publications. A resident of Nyack, New York, he teaches at Vassar College.

"David Means's writing combines formal inventiveness with emotional and spiritual richness,” said Anthony Domestico, associate professor of literature at Purchase College. “His characters hunt after grace and often find violence; they are frustratingly self-sabotaging and movingly resilient. He's one of our best short story writers, and his novel Hystopia and essays are just as brilliant."

As a small public college, Purchase is proud to introduce students to the level of expertise provided by the Durst Distinguished Lectures. Current and past Durst Lecturers have won an impressive array of the highest level of literary honors, including National Book Awards, MacArthur Foundation Grants, Pulitzer Prizes, Guggenheim Foundation Fellowships, and Man Booker Prizes for Fiction.

The renowned novelist Edwidge Danticat, who has been named the 2019-2020 Roy and Shirley Durst Distinguished Chair in Literature, will be featured in programs on November 14-15.