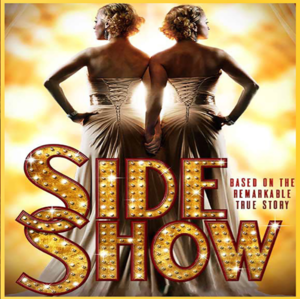 The White Plains Performing Arts Center (WPPAC) is proud to announce its upcoming Mainstage production of SIDE SHOW, playing April 22 – May 8.

From the composer of Dreamgirls comes a remarkable, true story of famed entertainers and twins, Violet and Daisy Hilton, who became famous during the 1930’s. SIDE SHOW is a moving portrait of two women whose bond brings them the spectacle of fame, but denies them true love and acceptance.

As the starring act of a downtrodden touring sideshow on the Orpheum Circuit; they are eager to accept an offer of fame, fortune and potential romance proffered by talent scouts Terry and Buddy who ultimately launch The Hilton Sisters into Hollywood stardom. Nominated for 4 TONY Awards (including Best Score, Best Book and Best Musical); SIDE SHOW is a stunning reminder of the importance to accept and celebrate what makes us unique; a story that will undoubtedly touch your heart.

“We are so excited to get to bring the original 1997 version of this show to our stage this season. says Stephen Ferri Executive Producer of WPPAC. “The show has been a personal favorite of mine for years and we look forward to giving the Side Show fans another chance to see this rarely done show while exposing a new generation of audiences to this beautiful show.”

“25 years later, SIDE SHOW resonates today more than ever. The show is a call for authentic universal empathy in order to advance our understanding of the human experience. We will only make meaningful change and progress once we remediate marginalization in all its forms in our society. In order to do that, SIDE SHOW asks us to find and see the other in each other.” Says Director Frank Portanova.