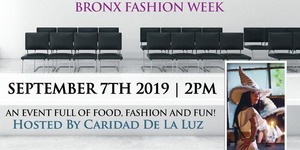 This event will be hosted by Caridad De La Luz, A Bronx living legend and performer known as “LA BRUJA” who recently performed in the successful Broadway musical I LIKE IT LIKE THAT as China Rodriguez. She is one of America's leading spoken word poets and was named one of the Top 20 Puerto Rican Women. Caridad was also awarded the Puerto Rican Women Legacy Award and The Edgar Allan Poe Award from The Bronx Historical Society.

The afternoon will commence as follows:

2:00PM to 4:00PM Guests will be greeted & enjoy culinary experiences by dozens of The Bronx’s Best Chef’s, Restaurants & Musical Performances

There are MAJOR celebrities confirmed to attend the event. Special Guest Star Francisco Burgos from the Hit Show STARZ Drama Series Power & CBS’s Elementary & Special Guest Model, TV Actor & Movie Star Sergio Gio Delavicci as well as the movers and shakers in the Fashion Industry that will be attending this event. This will be an event you don’t want to miss.

Bronx Fashion Week is already shaping up to be one of the most amazing fashion experiences at The New Mall at Bay Plaza surrounded by over 100 retailers from The Bronx. The mall has over 25 million visitors per year and is considered the most spectacular Fashion Destination.