Friday the 13th Harvest Moon Rising, Go Out and Feel the Night! 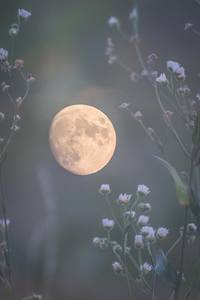 But there's a full moon risin'

Let's go dancin' in the light

We know where the music's playin'

Let's go out and feel the night

Friday, September the 13th meets a Harvest Moon, that’s what The Old Farmers’ Almanac tells us. So, why not go out and feel the night?

According to The Farmer's Almanac, this month’s full moon rises on the night of Friday, September 13, and reaches peak fullness at 12:33 a.m. EDT on the 14th.  The last time there was a full moon on Friday the 13th was in January 2006. BOO! That was 13 years ago!

What’s more, The Farmer’s Almanac ways Friday’s moon is a micro moon which is exactly the opposite of a supermoon, a full moon that occurs when the Moon is at the farthest point in its orbit around Earth, according to the Farmer's Almanac.

Not quite full, but breathtaking nonetheless, the moon in this post was photographed by Ridgefield resident, Rick Tango.