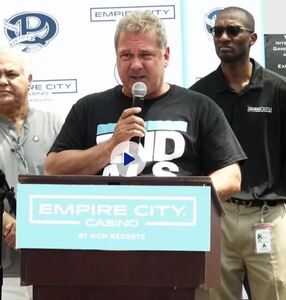 Yonkers Mayor Mike Spano, Empire City Casino by MGM Resorts executives and the family of late Yonkers Native Pat Quinn announced today that the 2021 ALS Ice Bucket Challenge will take place on Sunday, August 1, trackside at Empire City Casino. The annual event, co-founded by Quinn after his diagnosis of Amyotrophic Lateral Sclerosis (ALS) in 2013, became a global phenomenon in 2014 as thousands of people from around the world participated in the challenge on social media.

Though Quinn, unfortunately, passed away from ALS in November 2020, his drive and determination to find a cure lives on through his family, community and beyond. Leading the ALS Ice Bucket Challenge charge this year is Quinn’s dad, Patrick Quinn Sr., who will also pay tribute to his son and ensure his mission continues to live on.  Quinn Sr. also released a video encouraging everyone to support the effort, which can be viewed here.

Since 2015, Empire City Casino has hosted the annual challenge in support of Quinn and to continue generating awareness for ALS research (the 2020 challenge was canceled due to the pandemic). Each year, Empire City Casino donates the space, set-up and staffing, as well as over 1,300 pounds of ice. The festivities begin at 1:00 p.m. Ice Bucket Challenge participants can pre-register in-advance online at YonkersNY.gov/IBC.

ALS, often referred to as "Lou Gehrig's Disease," is a progressive neurodegenerative disease that affects nerve cells in the brain and spinal cord. With no known cure, Quinn began the Ice Bucket Challenge to put ALS on ice by raising awareness as well as donations for research. The challenge has remained a catalyst of the efforts to find a cure for ALS, with Quinn helping inspire billions of dollars in donations for ALS research, which has helped produce significant discoveries and breakthroughs.

“Empire City Casino is proud to again host the ALS Ice Bucket Challenge and is committed to continuing the legacy of the beloved Yonkers-native Pat Quinn in the fight for awareness and a cure for ALS patients the world over,” said Ed Domingo, MGM Resorts Northeast Group Senior Vice President and CFO. “We are incredibly humbled to be part of a community that always shows up and supports each other.”

“Pat Quinn’s fight and determination to combat this horrible disease has been so inspirational and we are proud to carry on his legacy,” said Mayor Spano. “Pat and his organization, Quinn For The Win, have courageously and selflessly turned his battle with ALS into one of the most successful social media fundraising movements this world has ever seen. We encourage everyone to join us on August 1st so we can continue the fight to find a cure for ALS.”

“I'm so grateful for the continued support from Mayor Mike Spano, Empire City Casino by MGM Resorts, and the entire City of Yonkers as we march onward towards a cure. The community that Pat has been able to build to raise awareness for ALS research and his Quinn for the Win Foundation is nothing short of remarkable.  Pat laid the groundwork to find a cure, and now it’s our job to finish his mission and find a cure to defeat ALS once and for all. I look forward to seeing everyone in August,” said Patrick Quinn Sr.

Recent years have also shown significant advances in research. A recent Oregon State University study showed a copper compound can help slow the progression of ALS after recent testing in mice. Just a few short years ago, researchers discovered a new gene associated with ALS that may hold the key to one day finding a cure. Additionally, new technology is allowing individuals affected by ALS to regain their voice. ALS usually strikes people between the ages of 40 and 70. Approximately 20,000 Americans currently suffer from the disease.