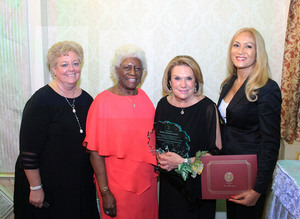 At a recent banquet, the Rev. Jerome A. Greene Democratic Club Awards Dinner honored Kathy Zamechansky, president of KZA Realty Group, along with several other Bronx residents for their commitment and determination to create a better life for the people of the Bronx.

“This is a special honor to be recognized along with so many other prominent people who make the Bronx a better place,” said Zamechansky, who has received numerous awards during her distinguished real estate career.
Other key supporters recognized for their lasting commitment to the community by the prominent political organization included Jack Doyle (Executive Director, New Settlement Apartments), Bervin Harris (President and CEO, Renaissance Youth Center), Rev. Albert Sutton, Sr. (Pastor, The Friendly Baptist Church) and Hon. Jeffery Dinowitz (New York State Assembly).

Established in 1979, the Rev. Jerome A. Greene Democratic Club supports the election of local candidates “who represent our community and our values.”

Founded in 1998 by Kathy Zamechansky, KZA Realty Group (www.kzarealty.com) is a New York City-based commercial real estate brokerage and development consulting firm specializing in commercial planning, project management, community and government relations, finance, marketing and communications. KZA Realty recently entered into an affiliation agreement with commercial real estate brokerage firm RM Friedland to provide enhanced client services. Ms. Zamechansky has won many awards, including the Bronx Chamber of Commerce 2018 Businesswoman of the Year. In addition to serving as Vice Chair of the Bronx Overall Economic Development Corporation and President of the Bronx Manhattan North Association of Realtors, she sits on the Board of Governors of the Bronx along with the Board of Directors of the Bronx Chamber of Commerce and the Harlem Business Alliance.