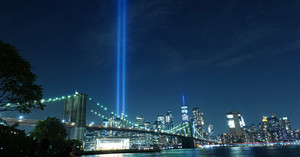 Ed Mullins, the President of the 13,000 member NYC Sergeants Benevolent Association, has announced that the SBA will host a Tribute in Light on the evening of September 11, 2020. This is in response to the city canceling the annual commemoration of the 9/11 terrorist attacks because of COVID-19 concerns.

"Mayor de Blasio has once again failed to represent the people of this city with his inability to provide a viable alternative to this sacred annual event," said Mullins.

"He allowed mass protests and riots in the city with no concerns whatsoever about the pandemic. He has shown time and again that he has no allegiance to crime victims in this city, whether they are killed in street encounters or by terrorists.

"The 9/11 attacks was an act of war on our nation, and the Tribute in Light remembrance paid tribute to the nearly 3,000 innocent victims who were murdered that day, as well as all of the people that continue to die from 9/11 related ailments and illnesses. These victims include members of the NYPD, PAPD, FDNY and other First Responders, as well as all of the people who went to work that day and died for our country.

"The mayor won't find a way to honor these heroes, but the SBA will pay tribute to all of the fallen victims by arranging for a Tribute in Light. A twin beam of light will shine on the evening of 9/11. The men and women of the Sergeants Benevolent Association will make sure of that.

"The mayor might have a short and selective memory, but the members of the NYPD will NEVER FORGET the sacrifice of every person who lost their life that fateful day."