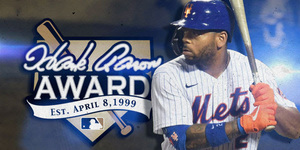 Dom Smith of the NY Mets has been named a National League finalist for the 2020 Hank Aaron Award.

Established in 1999 to honor the 25th anniversary of Aaron breaking Babe Ruth's all-time home run record, the Hank Aaron Awards are officially sanctioned by MLB and recognize the most outstanding offensive performers in each League. Aaron and a panel of fellow Hall of Famers will combine with a fan vote to determine the winners.

Smith's breakout season for the Mets included a .316/.377/.616 slash line, a .993 OPS, 10 home runs and 42 RBIs. The 25-year-old first baseman and left fielder ranked fourth in the NL in slugging and OPS, tied for fifth in RBIs and finished eighth in the batting race.

Although the fan voting window has closed you can click here to see all the finalists in both leagues. Winners will be announced by Major League Baseball at a later date.