Contents of Riverdale Home Unveil History, Stories: Tune Into HGTV's Everything But the House Tomorrow! 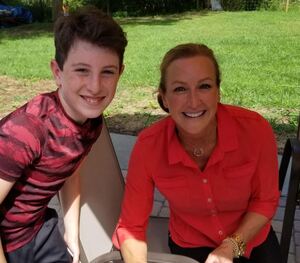 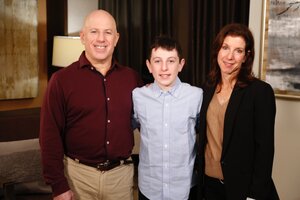 Eddie Levy, his wife, Lisa, and their 13-year-old son Connor will be featured in tomorrow’s episode of HGTV’s Everything But the House, hosted by Lara Spencer! The episode is packed with incredible history and stories told through family heirlooms that Eddie Levy discovered after cleaning out his family home in Riverdale, NY.

“The casting agent seemed to be intrigued by the stories and the potential that it could make an interesting show,” Eddie Levy told us.

Read our interview with Eddie Levy below (it’s lengthy but awesome) and then tune in to HGTV tomorrow, Friday, April 2 beginning at 9:30 pm.

How did your family get chosen for the show? Did you have to apply?

I didn't apply.  I needed to sell the contents of my parent's apartment in the city. My wife Lisa and I tried Sotheby's but a lot of the things my family had collected, although valuable, were no longer in demand. After learning that auction houses weren’t interested, I decided to turn to Craigslist.  A few days after I posted the title “estate sale” on Craigslist,  I got an email from a Casting Company! At first, I ignored it, thinking it was a scam. I did some research and quickly learned this was legit!  I responded, telling the casting company that my family home in Riverdale was packed with items accumulated over the years and in order to prepare the home for sale, I was planning on bringing it all to my home in Ridgefield.

You have a family rich in history and a fascinating story. Did that play a part in being selected?

The casting agent said HGTV is airing a new show about estate sales and they're looking for interesting stories that would pair nicely with the items that would be auctioned off on "Everything But the House" website.

My grandfather worked for Albert Einstein in the forties and my dad worked with Steve Wynn who owned Golden Nugget Casinos. When I was a teenager Steve Wynn invited my family to Atlantic City for a weekend. It happened to be the weekend that Frank Sinatra was performing and Steve Wynn introduced my dad to Sinatra! We were also introduced to John Travolta who was dining in the same casino restaurant.

Another bit of history - my grandmother was a Ziegfeld Follies dancer (popular many decades ago!) HGTV was interested in this and I showed them the [Ziegfeld Follies] book that she was in.

Wait, did you say Albert Einstein? Like the greatest physicist of all time?

My grandfather and Albert Einstein, who had a father/son type of relationship, worked together on a humanitarian issue. There was a situation that I believe may not be publicized, but I was told by my grandfather that there were children who had polio and their families deserted them. They were sent to an island to die.

My grandfather and Albert Einstein set up a mission to charter some boats and bring back as many children as they could so these kids could live in a more humane environment. There was a handwritten letter from Albert Einstein to my grandfather thanking him for all that they did together. I took pictures of it in the 80s. The original letter is with a collector.

The episode (9, season 1) is called History Funded Future. Can you explain?

When they asked us what we would do with the proceeds from the items that were being auctioned off, my wife Lisa just said we wanted to put it into investment accounts and let it earn interest for our son's college education.

Can you reveal some of the items that the appraisers selected to auction off?

I was surprised that they wanted some of my childhood stuff, which wasn't even on the list of things that I was planning on getting rid of!  They also wanted an original collection of Matchbox cars and my Wacky Packs trading cards as well as my collection of vinyl albums, turntables and my stereo equipment. As far as my family stuff, they took lots of antiques and gold bracelets and watches, some of which went for double their value.

Was there anything extremely hard to part with?

The hardest thing for me to part with was my dad's commercial art portfolio and my grandmother’s Ziegfeld book but I realized that I would probably just store them away and I figured a collector of artifacts of cultural importance might enjoy it.

Some background on the art portfolio:

Eddy said that in the 80s, Golden Nugget Casino owner Steve Wynn would call his dad late at night and say that he needed to change some advertisements for upcoming shows and asked Eddie’s dad to get the new advertisements needed by morning. Eddie said, “My dad delivered every time!”

What was the filming like? Any challenges due to COVID?

The filming was actually stress-free and extremely professional. We were initially worried about having a film crew in our house, not knowing if somebody had COVID-19. We actually thought about canceling the whole show because we figured it wasn't worth dying, to be on a TV show but they assured us that everyone from the crew will be wearing a mask and the only time we have to take off our masks is when we are doing the filming.

HGTV took many precautions and that every person from the film crew had to come in separate cars so they wouldn't be close to each other and everything was very structured and set up well in advance of the filming.

On the day of the first shoot, Lara showed up a few minutes before the filming. When she got there she was extremely energetic and seemed like a lot of fun. The first thing she asked us was if we would like to take some pictures with her. So, of course, we did!

We got into a conversation about vacation homes and got to talking about Vermont ski houses. I mentioned that years ago, I had a place in Mount Snow with an indoor swimming pool. Believe it or not, she said that she went to a party at my house in the 90s!

Learn more about HGTV’s Everything But the House here.