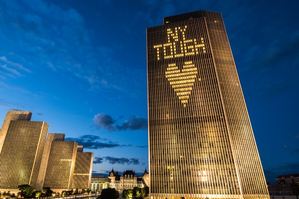 Yesterday, Governor Andrew M. Cuomo announced landmarks across the state would be lit in blue and gold and would project 'New York Tough' in honor of New Yorkers' work to flatten the curve of the COVID-19 virus.

Cuomo remarked, "The extraordinary bravery and discipline of New Yorkers has been on display throughout this extremely challenging period in our history, and thanks to their efforts, we didn't just flatten the curve—we bent it. In light of that, we've lit landmarks across the state in blue and gold in honor of the people who've personified, for this nation and for the world, what it means to be New York Tough."

The landmarks that were lit include: