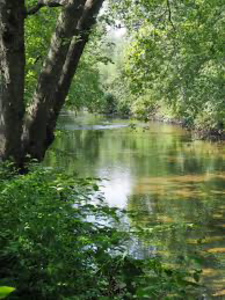 The restoration of a Bronx River tributary has begun with the expectation that the project will improve the river’s water quality, and curtail erosion next to the northbound and southbound lanes of the Bronx River Parkway in White Plains.

Fulton Brook’s banks have been washing into the Bronx River with each heavy rainstorm. Pollutants from surrounding roads and parking lots attach themselves to eroded sediment particles, and are carried into the river by storm water runoff. The small tributary has also become a tangle of invasive vines, exposed tree roots and raw embankments, incapable of withstanding the erosive forces of water.

Westchester County Executive George Latimer said: “The Bronx River is the recreational centerpiece of the Bronx River Parkway Reservation. It is a natural jewel in the County’s parks system, and this project will help us to protect and restore this precious resource for future generations.”

The current restoration project will stabilize the banks using some stone and native grasses, perennials, shrubs and trees. The result will be a naturalistic stream emptying into the Bronx River, just north of the Westchester County Center in the Bronx River Parkway Reservation, which is owned and managed by the County.

The restoration of nearly 500 linear feet of Fulton Brook is largely funded through a $475,000 state grant administered by the New York State Department of Environmental Conservation. County capital funding covers the project cost balance of $400,000. In addition to the stabilization materials, other project costs include clearing, grading and the replacement of drainage structures.

Commissioner of the Westchester County Department of Planning Norma Drummond said: “This project is one of several undertaken by the County to improve the health of the Bronx River and minimize the degree of flooding along its channel. Like some of the others, it was recommended in a Bronx River watershed management plan prepared by the County Planning Department, working with an inter-municipal coalition.”

Commissioner of the Westchester County Department of Parks, Recreation and Conservation Kathy O’Connor said: “The 807-acre Bronx River Parkway Reservation is used by thousands of residents and visitors every day. The river’s health is integral to the recreational experience of those who use the Bronx River Pathway, and enjoy this greenway through urban and suburban Westchester.”