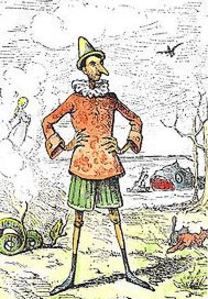 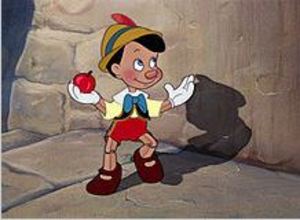 “Lies, my dear boy, can easily be recognized. There are two kind of them: those with short legs, and those with long noses. Your kind have long noses.”
― Carlo Collodi, Pinocchio

In the current political environment, it is perhaps natural to think of literary allusions to models of the deceptions and manipulations of language in literature. One obvious choice on many reader’s minds seems to be Orwell’s 1984, but another is Pinocchio with its hero whose nose is a clear barometer of his indulgence in “alternate reality.”

Most of us don’t recall Carlo Collodi’s original tale of a wooden puppet, published serially in a newspaper for children in 1883. Instead we remember the Disney film that was released in 1940, and therein lies an epic gap of cognitive dissonance that begins in Collodi’s purpose in writing.

1883 was a time of enormous political upheaval in Italy. In the previous decade a mass emigration had begun that would later be referred to as the Italian Diaspora. The economy had been devastated by industrialization, as well as from several rounds of disease, and the disruption that resulted from the unification of the Italian states into a constitutional monarchy. The year also included a devastating earthquake that perhaps left many wondering if the metaphorical ground of culture was also shifting under their feet. This is when Collodi begins his story.

Collodi’s original tale does not feature a charming puppet who longs to become a “real boy.” Collodi’s Pinocchio is a cautionary tale whose central character is a “confirmed rogue” and it is peppered with punishments for his bad behavior, including the original ending: an execution by hanging.

Disney had a problem when he originally decided to adapt the tale. The Pinocchio character was distinctly unlikeable, not at all a classic rascal. Partially Disney defuses the character with the strength of his animation, and the changes to Pinocchio’s physical depiction. Unlike the original illustrations, which seem to visually allude to a Harlequin character, Disney’s animation is a chubby boy in lederhosen and a Tyrolean hat. Makes you wonder.

The storyline changes too. At the center of Disney’s story is a longing for transformation, and of the possibility that “wishes can come true.” It is narrated by Jiminy Cricket, and it tells Pinocchio’s story as one of childish temptations, and a moralistic punishment by the Blue Fairy who makes Pinocchio’s nose grow to teach him a lesson about the importance of truth telling. It ends with a Jonah-like rescue of Geppetto from the belly of a whale named Monstro, and Pinocchio’s death as a puppet but revival as a “real boy.”

Listening to certain politicians these days we might wish for a visible marker of their indulgence in “alternative facts,” but perhaps it is well to remember that the original tale, a product of a time of political upheaval and cultural shifting, was a story of distinctively moral character. The real Pinocchio is not transformed or redeemable. His lies and bad behavior lead only to sadness and destruction.

Look for part II of this series, A Political Tale next Monday when we explore Orwell's Politics and the English Language.