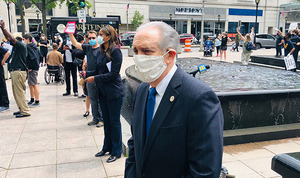 This afternoon, District Attorney Anthony A. Scarpino, Jr. and First Deputy District Attorney Victor Olds joined in a silent vigil for George Floyd, the black man who died at the knee of a police officer in Minneapolis.

In a statement after the event, DA Scarpino said, “As both a citizen and as District Attorney–I am just as outraged as everyone who attended this vigil and across the country–in the brutal death of George Floyd in Minneapolis. Those images of a police officer kneeling on a man’s neck are disgusting. What we saw was reprehensible. That is not who we are as law enforcement nor as citizens. I am calling for justice to be done swiftly and completely.”

The vigil was organized by the WESPAC Foundation and held at Renaissance Plaza in White Plains.