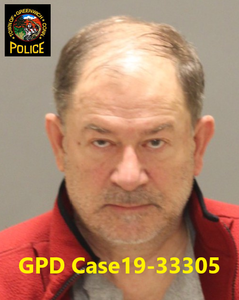 Greenwich Police began an extensive investigation in October of 2019, which involved digital evidence and thousands of digital photographs. After establishing probable cause and obtaining an arrest warrant from the State Superior Court in Stamford, CT, Greenwich Police Special Victims Detectives and members of the New York Westchester County Safe Streets Task Force located and arrested Mueser at his residence in Tuckahoe, NY. After waiving extradition, Mueser was transported to Greenwich Police headquarters on April 7, 2020.

Mueser was able to post a $250,000.00 Surety Bond and was released from custody. Mueser is to appear at Stamford Superior Court, 123 Hoyt Street, Stamford, CT, on June 4, 2020, at 9:00 AM. Due to the sensitive nature of this investigation and the age of the victim, no further details will be released at this time.

Detective Division Commander, Captain Robert Berry, wants to acknowledge the work and effort performed by Detective Michael Rooney of the GPD Special Victims Section. Det. Rooney displayed a high level of service and compassion for the victim and the victim's family during this investigation. His dedication to the family sets an exemplary example for others to follow.

If you believe that you may be a victim or know of anyone that may have been victimized by the suspect in the New York area, the FBI is requesting that you contact them at 1-800-CALL-FBI.