3 Killed in One Car Crash on Cross County Parkway 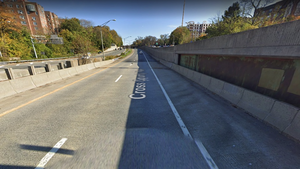 1 teen and 2 men in their 20's were found deceased at the scene.

At 2:26 a.m. this morning, Westchester County Police received numerous calls regarding a single car accident on the eastbound Cross County Parkway in Mount Vernon, near the Hutchinson River Parkway.  Responding Westchester County Police officers found the wreckage of a blue Toyota in the center lane of the Parkway. Within the wreckage, officers found the body of a 16-year-old female passenger. The bodies of two other passengers, a 22-year-old male and a 24-year-old male, we found outside of the vehicle.  All of the deceased are believed to be residents of the Bronx and their identities are being withheld pending the notification of their families.

The driver of the vehicle, a 21-year-old Bronx man, escaped with a minor hand injury and was taken to Westchester Medical Center for treatment. His identity is being withheld pending notification of the families of the deceased.

The cause of the accident is under investigation and the Cross County Parkway remains closed eastbound between the southbound Hutchinson River Parkway and New Rochelle Road at this time.