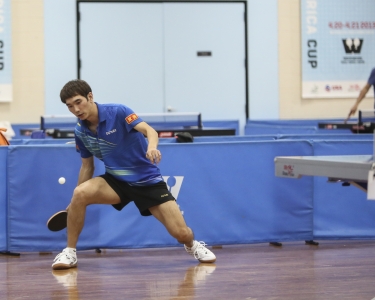 Since the monthly Westchester Open started almost 3 years ago, no one has ever won it more than twice in a row.

That record may fall this weekend (Sept. 27-28), when China's Qing Feng Guang goes for a threepeat at our September Open. With his fierce, variable chops and quick smashes, Guang looks unstoppable ... but we'll see! His USATT rating of 2780 is 37 points higher than any American's. It's 112 points higher than the WTTC's Kai Zhang (2668), who's ranked #7 in the country. Still, it won't be a cakewalk. If you're not competing, come watch some spectacular play.
The complete list of events this weekend, with starting times, appears below. Special events are Opposite-Handed (in which righties must play left-handed, and vice versa) and Doubles U-3500. There's also 14 Years & Under and 40 & Over.
The entry form appears on our website and at the club. Registrations are also accepted at the door. Unrated players can enter rated events if we have an objective basis on which to estimate a rating. As always, cash is awarded in every event -- over $5,000 altogether.
North American Tour   The 2014 NA Tour is now two-thirds over. The current leaderboard, with rules, is here. At the end of the year, the 16 players with the most Tour points will be invited to the Grand Final -- which will be held at the Westchester TTC on Feb. 7-8, 2015. The event will have more than $10,000 in prizes, including $3,500 for first. The Tour will provide two nights' lodging for out-of-towners, all meals from Friday dinner through Sunday lunch, a welcome party on Friday night, and a $300 airfare reimbursement for anyone flying to New York. We hope all 16 qualifying players will attend this event.
Plastic Balls   The open event this month will feature the new ITTF-approved plastic ball. All other events will continue to use the old celluloid ball. We plan to gradually switch over to the plastic ball for all events over the next few months.
Spectators   The cost for spectators this weekend is $10 for either day ($5 for WTTC members). Please pay at the door. The spectator fee helps underwrite our considerable prizes. There is no charge for family members of players or for people who help with the tournament.
Hope to see you this weekend!
--Will
www.westchestertabletennis.com